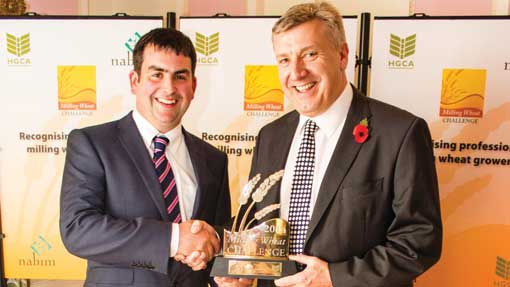 Farm manager Joe Edwards became Britain’s top milling wheat farmer this week with a winning formula of timely drilling and feeding his crop through to harvest.

On heavy clay soils in Gloucestershire, he grows mainly breadmaking wheats in a high input system and generally hits the miller’s specifications for his grain.

He beat off two other finalists from Cambridgeshire and Buckinghamshire to win the Milling Wheat Challenge organised by the National Association of British and Irish Millers (Nabim).

“The key factors were establishment, nitrogen timing and giving the plant whatever it needs,” he told Farmers Weekly after receiving his award in London on Thursday (Oct 30) evening. Mr Edwards (left) received his trophy from Nabim vice-president David Wright.

Virtually all his wheat hit the miller’s requirement this summer earning him a £20/t plus premium on his harvest which yielded about 9t/ha across the farm.

Some 80% of his 300ha of winter wheat is down to milling varieties such as Solstice, Crusoe, Gallant and Cordiale, with only Gallant slipping up on protein levels this year because of its high yield. This season he is moving away from Solstice in favour of new variety Skyfall.

He looks to sell 50% of his grain forward before harvest aiming for a £20-25/t premium over feed wheat and watches the markets carefully before selling the rest.

“I look to keep an eye on the markets and talk to a number of merchants before selling,” Mr Edwards added.

He is particularly pleased with the Crusoe grown under contract for breadmakers Warburtons which guarantees him a £20/t premium at a slightly lower specification of 225 hagberg, 74kg/hl specific weight and 12.5% protein compared with a traditional millers’ demand of 250, 76 and 13.

Farming on the Boddington Estate some two miles north-west of Cheltenham, rainfall can be heavy, at over 40inches in wet years, so establishment is important and drilling starts in mid-September.

“You only get one chance on heavy land so you drill as soon as you can and feed the crop throughout the year,” he said.

Moderate levels of blackgrass are kept under control with a robust pre-emergence herbicide, Avadex granuals and then Atlantis in the spring if needed.

Disease is always a risk in this wetter western climate so a four-spray fungicide programme with tight timings is necessary to keep yellow rust and septoria at bay.

A four-way split of nitrogen rate of 300 kg/ha is used with all fertiliser applied by the flag-leaf stage, with Mr Edwards preferring to use liquid nitrogen because of its better accuracy and takeup by the crop.

He is also focused on improving the organic matter of his heavy land by buying in poultry manure and using cattle manure from the estate.

Since harvest, Mr Edwards has moved to a new farm manager position for Langmead Farms, Bosham, near Chichester, West Sussex.