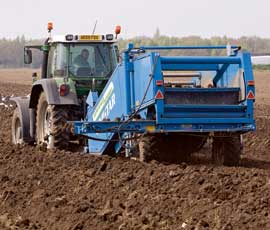 A potato pest that has been found in Portugal and Spain would cost the UK potato industry £10m-41m a year if it became established.

And once established, Epitrix flea beetle would be impossible to eradicate, Colin Jeffries, from the plant health branch of Science and Advice for Scottish Agriculture (SASA), told growers at British Potato 2011.

The main losses from Epitrix are from feeding damage on the tubers, with one species producing feeding holes of up to 1cm deep, while three other species cause more superficial damage.

Typically found in the Americas, two species have been found in Spain and Portugal, but all four species could potentially spread to parts of the EU. Any potato tubers, including seed, with soil or plant debris could be help it spread, Dr Jeffries said.

The UK had a voluntary code for notification of potato imports from Spain and Portugal, he said, while the EU was currently discussing the introduction of new legislation, including proposals for the establishment of pest-free areas and washing or brushing potatoes before export.