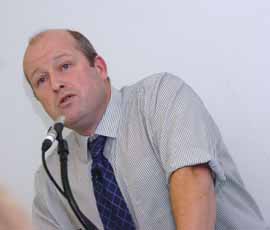 Poor practice, as well as the weather, could have contributed to higher than usual maximum residue level exceedances for potatoes treated with nematicides.

“In some crops, problems have been caused by growers switching products and not paying attention to the harvest intervals,” he said.

That was particularly the case for salad and early potato crops, where growers had struggled with the low availability of their usual treatment of Mocap (ethoprophos). Mocap has a harvest interval of only eight weeks, whereas Vydate is 12 weeks and Nemathorin 17 weeks (119 days).

“The 119 days was put on the label so the product would not be used on those crops,” Tom Whitworth, Nemathorin product manager for Syngenta, said. “But with the shortage of other products in the market we have seen it being used.”

That had contributed to the higher number of exceedances this season, which still totalled less than 1% of the treated area, he said.

The dry April and May had also been a factor, he believed. That had delayed the breakdown of the nematicide in the soil, which would normally start from the time of planting. “It has been like the perfect storm for Nemathorin.”

In exceptionally dry seasons it could pay to start irrigating before you would normally, Dr Haydock suggested.

Growers should also consider monitoring residues in potatoes prior to harvest where there was a risk of exceedance, he said. “A number of firms have been operating a “positive release” strategy for crops harvested within three weeks of the harvest interval with success.”

Syngenta was investigating all cases of exceedances with packers, processors and growers, Mr Whitworth said. “We are working to improve our best use guidelines, and will be holding 15 stewardship workshops where we are targeting the operator.”

However, there was concern within the industry that the problems this season could result in a longer harvest intervals for the products being put in place, which could have implications for their use.

1) Service and calibrate applicators pre-season and during application

2) Do not exceed maximum dose under any circumstances

Read more from British Potato 2011 on our dedicated page.