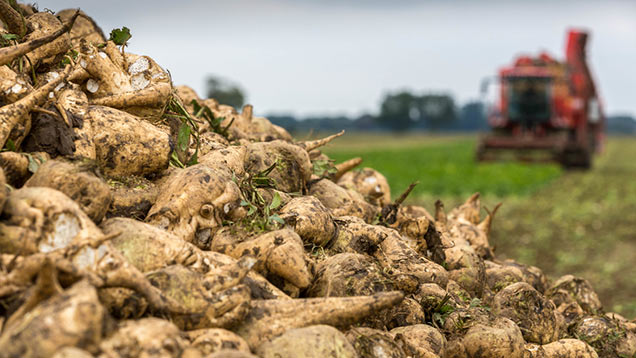 Sugar beet growers will receive a reduced price of £20.30/t for their 2016-17 contract tonnage, processor British Sugar has announced.

The £3.70 price cut from the 2015-16 campaign’s £24 comes after a period of contract negotiations between British Sugar and NFU Sugar.

The price of £20.30/t applies to both contract beet and industrial beet used for biofuel.

An announcement on the surplus beet price will be announced later in the year.

A global and domestic sugar surplus forced British Sugar to slash contract tonnage by 20% for the 2015-16 campaign, with 11% abandoned voluntarily and 9% enforced elsewhere.

Contract performance rules were also relaxed to discourage over production, with growers obliged to fulfil 90% of their contracted tonnage averaged over two seasons, rather than 95%, before receiving a penalty.

“The package we have negotiated should enable beet to compete in rotations on farm and builds for a successful future for both growers and the UK sugar beet industry.”
William Martin, NFU

There will be no restrictions on contract tonnage for 2016-17, but growers can opt to grow any proportion they wish, from 0-100% of their contract, without any consequences for their 2017-18 contract.

British Sugar also announced that transport allowance would be calculated from the Industry Haulage Scheme costs, including cleaning and loading of beet.

There will be no additional payment in 2016-17 for those in the Industry Haulage Scheme, which allows British Sugar to collect beet direct from farm.

On reaching agreement, British Sugar’s agriculture director Colm McKay said: “We believe our agreement [with NFU sugar] sets a firm foundation for the future and demonstrates a commitment to work together to ensure our industry can compete in an increasingly competitive market place.”

NFU sugar board chairman William Martin added: “The package we have negotiated should enable beet to compete in rotations on farm and builds for a successful future for both growers and the UK sugar beet industry.”

Growers should receive their contract offers online or by post in the week commencing 6 July.

If they have any questions regarding the contract announcement they can contact the NFU Sugar helpline on 03700 661 974.