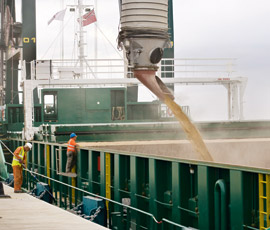 British soft wheats are well known in the European Union for their biscuit making and bread blending qualities and now southern Mediterranean markets are opening up.

Research carried out by British Cereal Exports (BCE) show demand for soft biscuit wheat is rising in Morocco and Lebanon with an annual need for over 300,000t.

BCE chairman Mike Hambly says that with about 16-17% of British cereals going overseas there are some excellent opportunities for cereal growers.

“It’s all about knowing what the consumer wants and then meeting that criteria by speaking to merchants and agronomists,” he told a HGCA-organised Meet the Exporter workshop in Southampton.

The export focus is on the HGCA Group 3 biscuit-making wheats and Group 4 feed wheat which are soft milling varieties.

“It appears the soft wheat in the UK almost behaves differently with different characteristics that makes it really sort after by millers,” Mr Hambly added.

“For us we are able to grow Group 3 wheats that are only a couple of percent down yield wise, but we can still get the quality,” he said.

“It’s about risk management and spreading that risk. In these volatile times the export market provides a great outlet,” Mr Osmond added.

Britain exports about two million tonnes of wheat annually, worth about £482m, with southern European countries, such as Spain and Portugal, being two of the most prominent customers.

With export export volumes drastically lower after a poor harvest, the BCE and HGCA have worked hard to support the brands of UKP (hard wheat) and UKS (soft wheat).

“The two brands of UKS and UKP are really understood by our overseas companies and have also helped growers over here understand what needs to be grown,” Mr Hambly said.

“It’s not just the soft wheat that are important, UKP hard wheat also play a vital role in the export market,” he said.

Find out more on the HGCA events with meet the miller

See the HGCA’s video on “Meet the Exporter” in Ipswich