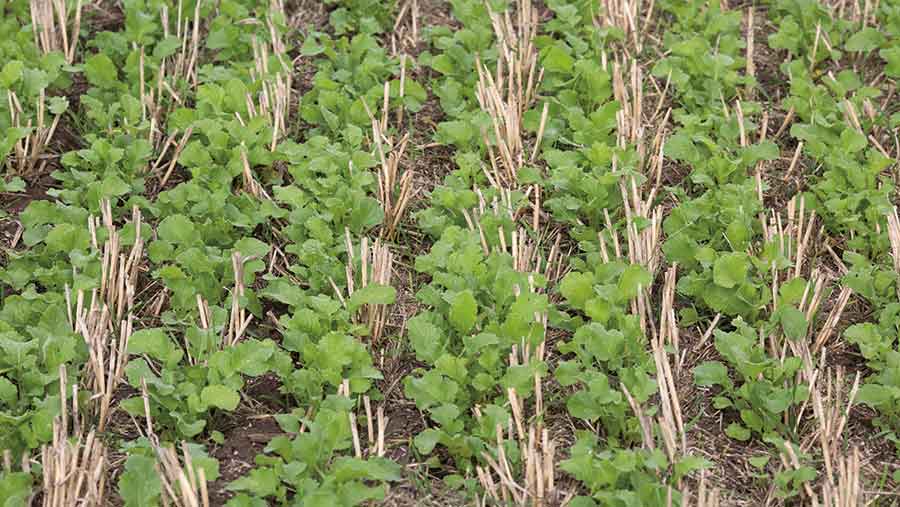 As more producers include cover crops in their cropping rotations to retain nutrients and improve soil health, there has been an increased interest in broadcasting as a means of cutting costs.

Broadcasting seed instead of establishing with a conventional drill or a direct drill could cover the cost of the seed itself.

However, there is little data on whether broadcasting can be successful and if it is unsuitable for certain species.

This prompted Lincolnshire-based cover crop specialists Shepherd Seeds to carry out trials on two sites this summer to help identify the possible pros and cons.

The two field trials in Lincolnshire, one on heavy clay (north), the other a medium clay loam (south) were set up as 12m-wide field-length plots, laid out across the crop.

Six cover crop species were broadcast at standard sowing rates on 15 July and the differences in germination and establishment timings were monitored.

Prior to sowing, the suitability of each species for broadcasting was analysed using a granular applicator tray test system.

This determined the exact spread width each species was capable of, explains the company’s Will Shepherd.

“Based on the results [see graph], many of the smaller-seeded species would not consistently travel further than 12m, so mounted 12m disk spreaders were selected for application,” he says.

“We found an added advantage of using a smaller disk spreader over a larger machine was the increased spreading accuracy at shorter widths, along with much less seed damage being recorded.”

When broadcasting into a standing crop, timing is crucial. Too soon and the cover crop may become too tall and cause issues when combining.

Too late and the cover crop may not have enough time to establish before being covered with a mulch of straw and chaff, Mr Shepherd says.

The trials were broadcast with a planned five-week interval before combining and were monitored until reaching an establishment height of 11cm.

“At this point, the cover crop would be about the same height as the stubble after combining at both trial sites.

“Species that grew taller than this were damaged when the combine passed through, but they caused no issues to the machine itself.”

Mr Shepherd adds that if higher seed rates had been used and the conditions had been more favourable, the cover crop could have potentially caused problems.

“It all comes back to the need for a better understanding of application timings,” he says.

Weather data was gathered to compare the effect of localised climate on germination timings.

Over the same period of time, the northern site received more than twice the rainfall than the southern site, which on average was 2C warmer throughout the establishment period.

The germination timings (see “Establishment results across two sites”) between the two sites varied from a couple of days, through to a total establishment failure of the vetch at the southern site.

Mr Shepherd highlights that a prolonged period of hot, dry weather in the second week following broadcasting held back the germination of the larger-seeded species at this site.

However, the smaller seeds did manage to germinate in what little moisture they had been exposed to in week one of the trial, he says.

The higher total rainfall at the northern site had a positive effect on germination speed, with all species successfully germinating within six days.

The southern site – with its lower total rainfall but higher average temperature – saw slower, less-vigorous germination across all species.

Mr Shepherd believes the importance of moisture during the early stages of growth is clearly demonstrated throughout the trial, particularly at the southern site. Once the crops had established they grew quickly, even in the drier conditions.

When broadcasting costs are compared with those of conventional or even direct drilling, it is clear there are substantial cost savings to be made, says Mr Shepherd.

“The lower fuel costs and man hours alone, in most cases, would all but offset the cost of the seed used.”

The main trade-off, however, is the speed and success rate of germination and the total establishment of cover, he adds.

The trials show that under the right conditions, and with careful consideration of expected rainfall, broadcasting a cover crop into a standing cereal crop is a successful way of quick and cost-effective establishment.

However, the lack of moisture during germination and early establishment is the single biggest limiting factor of this method.

“Although species with larger seed sizes are capable of being broadcast further and with greater accuracy, they also require higher levels of moisture to germinate and establish successfully.

“This is something that cannot always be guaranteed at the time of application.”

Species with smaller seed sizes, such as a mustards and tillage radish, germinated better in the drier conditions, but their use in situations requiring larger spreading widths is limited, Mr Shepherd adds.

In areas with reliable pre-harvest rainfall and taking into account the associated cost and time savings, broadcasting is a viable establishment option.

However, Mr Shepherd believes that in drier areas of the country it may still prove more effective to direct drill or conventionally establish a cover crop later in the season, where cropping allows.

This will help ensure good germination and better early establishment.

“Further trials are planned for the coming year to help us gain further knowledge around application timing,” he concludes.