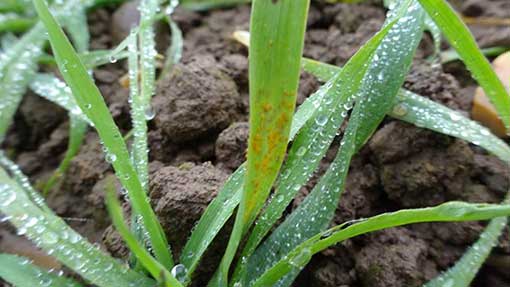 Brown rust is the biggest potential disease threat facing wheat crops this season, rather than yellow rust or septoria, a leading crop specialist is warning.

Colin Lloyd, head of agronomy at distributor Agrii, said conditions are similar to seven years ago, with lush crops after a mild autumn and winter.

“Conditions so far this season are remarkably similar to 2006-7. Back then we had just two frosts of below -5C, lush crops from an open autumn and early winter, large areas of rust-susceptible cultivars and new rust races expanding their host range,” he said.

Then, many growers didn’t apply a T0 fungicide, and brought their T1 sprays forward to counter an early septoria threat and so opened the door to a brown rust epidemic by leaving too much time for the disease to develop ahead of a T2 treatment.“As a result, the rust wreaked havoc across the country,” he told the Agrii northern farming conference at Bishop Burton, Beverley, Yorkshire.

“Conditions were again ripe for the disease in early 2011. But, thankfully, seven hard frosts in February averted the threat,” he added.

So far this season he has recorded six frosts and none of them have been below the -5C necessary to reduce brown rust inoculum by causing significant lower leaf loss.

In addition, there is little prospect of a significant cold snap on the immediate horizon, and more than 40% of the winter wheat area is down to varieties with a brown rust resistance score of 5 or less on the HGCA Recommended List.

Brown rust has already become apparent in early-sown winter wheat at the group’s trial site in the Scottish Borders.

He advises growers and their agronomists to check susceptible varieties very closely for brown rust, alongside both yellow rust and septoria, in the coming weeks, especially if there are no hard frosts.

A well-timed and specified T0 will be vital to knock any infections on the head early, he advised.

“We know from 2007 just how rapidly and aggressively brown rust can cycle if it isn’t tackled at the start of the season, how difficult it is to control once it gets going and how damaging it can be to yields,” he added.

Mr Lloyd suggests a triazole-chlorothalonil or a triazole-folpet fungicide treatment at the early T0 timing of mid-March to control the disease.

See also: Yellow rust on course for worst ever season