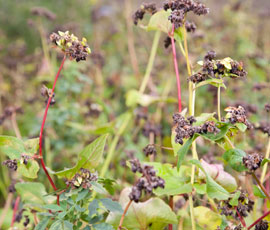 Trials have shown that buckwheat could be used to help control weeds, particularly common couch grass and blackgrass.

Couch grass is a particular problem in organic rotations, and experiments have shown that compared with other cover crops, offered around 65% suppression of couch grass.

“In a practical situation sowing, buckwheat immediately after cultivation will get the biggest smothering effect on weeds, as the plant is very fast growing,” said Lynn Tatnell, of ADAS.

Research also focused on other weed species, which were treated with both chopped and liquidised buckwheat extract. The liquidised extract showed 80% reduction in blackgrass germination.

“It could be something that we could think about as a cover crop in horrendous blackgrass situations where growers are being forced into fallow,” said Ms Tatnell.

“With the loss of actives and presence of resistant blackgrass it could be a useful tool in reducing weed populations in problem areas; however, more research will be needed,” she added.