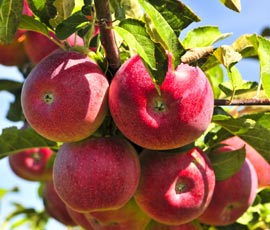 The coldest spring in 50 years could be good news for orchards, increasing the chances of bumper crops of apples and pears, raspberries and blackcurrants this harvest.

The prolonged cold spell may not be welcome for cereal crops, but it has provided excellent winter chilling conditions for fruit crops.

The unusually cold weather from February to May meant fruit crops held back bud development until favourable conditions arose when stored energy can be used to best effect, said Barry Mulholland, head of environmental consultancy ADAS.

At one stage, fruit crops were up to eight weeks behind last year, but after winter released its grip, trees were able to catch up and use the stored energy to create thick blossoms.

Mr Mulholland, head of horticulture at ADAS, said: “The open blossom period will have a big impact on the final size of the crop. Provided they are not hit by a late frost, although this risk is less because crops are later, if the weather is sunny and hot the prospects are good.

“However, it goes without saying if we have another cool, wet and dull summer like 2012 the harvest will be poor and late again.”

At Lathcoats Farm in Chelmsford, Essex, Philip and Stephen Taylor were upbeat about potential for bumper apple crops. The farm devotes about 70% of its 55ha to growing apples, including Cox, Gala, Braeburn and 40 heritage varieties.

“Last year was a dismal year whatever you were growing – whether it was cereal crops, vegetables of fruit, it was a washout,” said Philip.

“This year, we are optimistic. But there are three months between blossom and harvest and anything can happen in that time. We could get a hailstorm the week before harvest and it would ruin everything.”

This spring set to be coldest in 50 years