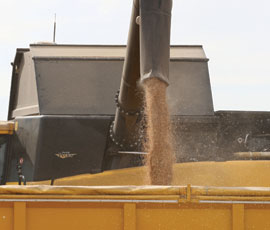 With many readings dipping into the mid-60kg/hl range, and some as low as 50kg/hl, calls for a solution were made at the recent UK Grain event.

“I’ve never seen anything like it in 30 years of farming,” said Phillip Rowbottom, who runs a farming and contract storage business handling 8,500t of feed wheat near Wakefield, Yorkshire. “The country is swamped with rubbish, but merchants just don’t want to know. The scalebacks they’re charging are excessive; they bare no relation to the feed quality of the grain whatsoever.”

Faced with deductions of nearly £30/t for grain with below 60kg/hl, he stopped loading. “I accept it is a nightmare year, but the mills don’t seem to be taking enough account of the problems we face. We know we have a problem, and we need to move the wheat. But we need some sort of system to sell crops successfully.”

HGCA studies conducted in 2001 showed specific weight was a poor guide to the nutritional value of feed wheat, said Susannah Bolton, head of research and knowledge transfer at AHDB-HGCA.

A subsequent study in 2007 recommended the wider use of near-infra-red (NIR) analysis, as a far better guide to feed value.

So far, NIR analysis is mainly restricted to use within feed mills, to aid manufacturing, rather than in sourcing wheat. The implication is that wheat is bought on one specification and sold on another.

It is also well known that ruminants are far better able to digest low specific weight feed wheat than mono-gastric pigs and poultry. “Poultry users tried 64-65kg/hl wheat, supplementing it with oils and fats, and just weren’t getting to their 2kg bird weights in time, taking 41 days instead of 35,” said independent grain consultant Richard Whitlock. The problem is even more pronounced in chick feed.

Structuring scalebacks to take account of whether grain is destined for ruminant feed, or pig and poultry feed, could help this season, Mr Rowbottom agreed.

The causes of low specific weight are also being re-examined. Summer sun, rainfall, variety and plant population all have roles to play, but the importance of ear disease is under fresh scrutiny.

The feeling is that ear pathogens may have more of a role than they get credit for, particularly since so much attention has diverted to their role in mycotoxin formation, with much of the focus falling on mycotoxin-causing Fusarium culmorum.

This year, Microdochium nivale, which does not produce mycotoxins, was at very high levels instead. So while mycotoxin loadings seem not to be as severe as initially feared, specific weights have suffered. Better control of M nivale in future could help protect specific weights more effectively, Dr Bolton suggested. An HGCA study of samples from Recommended List sites is under way.

One way to boost bushel weight is to pass grain through a batch dryer, with several suppliers suggesting a lift of anything from 4kg/hl to as much as 7kg/hl.

The logic is that passing grain over the dryer’s relatively aggressive screens every 10-15 minutes, for two to three hours, will rub and polish outer debris off the grain, so improving the sample. Furthermore, dust and debris is removed, in much the same way as an in-store cleaner.

The results can be very beneficial in a tough season, said Opico’s product manager Angus Steven. “We have a client who is hoping to move 2,000t of milling wheat from 68-69kg/hl up to his 72kg/hl contract target, at the same time as drying it down from 16%. Moving that bulk into the right specification will command a premium of at least £8/t, which goes a long way towards covering capital and running costs.”

Read more on specific weight as a measure of wheat quality