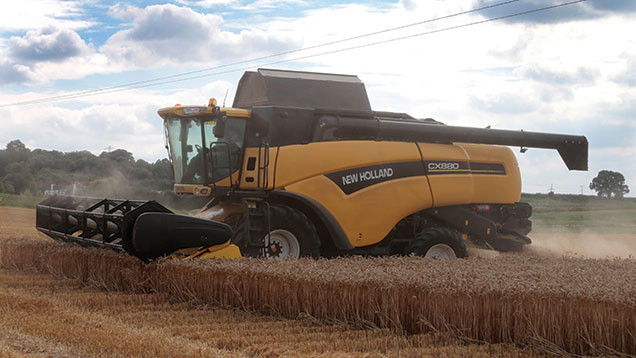 Calculating exactly how much nitrogen to apply to your breadmaking wheat crops requires a methodical mind. Sarah Henly finds out what you need to consider and works through the process with a grower.

Breadmaking wheats are taking a larger share of the wheat market this season and growers will need to be spot on with their nitrogen fertiliser to meet the needs of millers.

This swing to milling wheats is due to a potential premium of about £47/t over feed wheat and new high yielding breadmaking varieties.

Meeting breadmaking protein specifications, typically 13%, is always a gamble. The inverse relationship between yield and protein just complicates the picture.

“It’s difficult enough to work out how much nitrogen it will take to make 13% protein in Solstice, but the yield dilution effect makes it harder to decide how much fertiliser to put on varieties such as Skyfall, Trinity and Lili,” he adds.

On the HGCA Recommended List, Skyfall, for example, has a protein of 11.8% and offers 102% yield of the treated control, which could give an extra 0.5t/ha over Solstice.

Good grain filling weather last July contributed to the lower than average grain protein contents in breadmaking wheat (11.9%), about 0.5% down on the previous year according to an HGCA quality survey.

The principles of nitrogen management are set out in the HGCA’s Nitrogen for winter wheat management guidelines, which is consistent with industry benchmark, RB209 – Defra’s updated Fertiliser Manual.

There’s a misconception that RB209 is a rulebook. The recent HGCA Green Food and Yield Plateau reports suggested that insufficient nitrogen fertiliser may be limiting yields on some farms, says Dr Kindred.

Breadmaking varieties need more nitrogen than feed varieties to get to optimal yield, even before thinking about extra nitrogen to meet protein requirements.

Nmax is a legal maximum limit averaged over the area of the crop on the farm.

Nmax for winter wheat is 220 kg/ha of nitrogen, subject to the following adjustments:

Growers adjusting Nmax based on yield potential must have data from at least two years to prove realistic.

“With higher yielding breadmaking varieties, it’s inevitable that more nitrogen must be available to the crop if protein levels are to be maintained. We are working with breeders to test this,” he adds.

Constraints in the form of nitrate vulnerable zones (NVZs) needn’t be an issue if you take into account all factors and keep good farm records.

If you use higher than average nitrogen fertiliser rates, you must produce a paper trail to justify your actions, says Dr Kindred.

“You must have achieved and recorded the improved yields for two years, and have an area of crop that receives less nitrogen so that Nmax limits for the crop are not exceeded,” he warns.

“Defra’s February-issued spring N advice states that forward crops may have captured more soil N this year. There’s probably no need to adjust rates to cover losses through the profile, since it wasn’t a particularly wet winter,” he says.

As to what type of nitrogen fertiliser to use in breadmaking wheat, previous research points towards extra nitrogen being most effective in the form of foliar urea applied at milky ripe (GS75), following the main dose of ammonium nitrate at flag leaf emergence (GS39).

A rate of 40kg/ha of foliar urea should improve protein levels by 0.75-1%, says Dr Kindred, with the caveat that it can be expensive and only worthwhile if the crop is borderline milling quality.

One grower who has consistently shown an increase in protein contents with additional nitrogen fertiliser is Robert Caton of Goddards Farm near Thaxted in Essex.

He grows breadmaking wheat varieties Solstice, Crusoe and Skyfall, trialling the latter two alongside Trinity and the feed wheats, Evolution and Santiago, on his 140ha farm.

Mr Caton aims to achieve a yield of 10.5t/ha and to do this, needs more nitrogen than the average 220kg/ha recommended in RB209 for clay loam soils.

He regularly hits 10t/ha with breadmaking wheat, giving him the confidence to use an extra 40kg/ha of nitrogen for yield and 40kg/ha at the milky ripe stage to secure a milling premium.

“We look at past achievements, remembering that protein content is a better indicator than yield as to whether we are getting nitrogen use about right. The protein content here last season in Solstice averaged 12.8%,” Mr Caton says.

Crops are looking well after good establishment and a mild winter. Mr Caton’s agronomist Jamie Mackay estimates the wheat took up 5-15kg/ha of nitrogen up to mid-February.

Mr Caton has the results of soil mineral nitrogen tests and Mr Mackay has estimated the SNS values from data gathered over 10 years from local farms on the same soil type.

First wheats after oilseed rape or pulses have 60-70kg/ha of nitrogen available to them, while second wheats have about 45kg/ha this spring.

Mr Caton bought his fertiliser at 70p/kg, so his break-even ratio – balancing fertiliser and grain prices – works out at a sound 4:1 using a budgeted grain price of £160/t.

There’s a difference in the price per tonne of urea and ammonium nitrate in favour of the former, so Mr Caton uses urea early, then ammonium nitrate for the all important dressing in mid-May, following with liquid nitrogen where a protein boost is required.

In first wheats, the first top dressing of 100kg/ha goes on relatively late, towards the end of March, to prevent crops lodging.

The remainder of the solid – 130kg/ha – is applied in early to mid May. In second wheats, he uses 60kg/ha in mid-March, 120kg/ha in mid-April, with the remainder for yield going on in mid-May around flag leaf emergence.

Both first and second wheat crops receive a foliar spray of 40kg/ha at the milky ripe stage, specifically for protein.

This season the majority of fields will have 280-300kg/ha available to the crop, without which Mr Mackay thinks they generally do not achieve high enough protein levels.

“We don’t know what levels of sun and moisture will be available through the grain filling period so it’s an inexact science. But we are confident in our calculations and on the whole have been satisfied with the results,” he says.

Points to work through, according to HGCA’s nitrogen management guidelines: