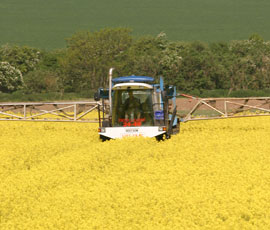 Improvements in agronomic characteristics, rather than higher gross output, are behind most of the six winter oilseed rape variety additions to the new HGCA Recommended List for 2012/13.

Of the three varieties added to the east/west region, none can outperform the top three on yield, leaving PR46W21, DK Cabernet and Sesame heading the order.

But new conventional type, DK Camelot, has the earliness and shorter stem preferred by many growers and often referred to as low biomass, together with a gross output of 106%, notes Recommended List manager Simon Oxley.

“It’s a very different proposition to the likes of DK Cabernet and Sesame, which are taller and later,” he says.

DK Camelot will, however, need attention for phoma stem canker, he warns. “It has a five for phoma, but a six for light leaf spot.”

In contrast, the new hybrid from Dekalb, DK Expower, has excellent resistance to phoma, scoring a 9. “It’s really good to see this level of resistance coming onto the list.”

DK Expower’s gross output is just behind that of DK Camelot at 105%. “Where it might need help is with light leaf spot, which is a six. So that should be monitored, as it’s a disease that seems to be on the increase in this region.”

The new semi-dwarf hybrid variety, Thorin, is the exception when it comes to gross output, he continues.

“It joins the list with a gross output of 104%, so it really takes yields on for the semi-dwarfs and starts to make them competitive with other types.”

As expected in a semi-dwarf, Thorin gets nines for stem stiffness and shortness. Disease resistance scores are six for light leaf spot and five for phoma stem canker.

Three varieties have been removed from the east/west region list – Excel, DK Secure and NK Bravour.

In the north, three hybrid varieties have been added to the Recommended List for 2012/13. All bring improvements in light leaf spot resistance, with one also having a specific recommendation for growing on clubroot infested land.

“We had very good winter oilseed rape yields in 2011, so it’s not surprising that there hasn’t been a step up in output,” comments Dr Oxley.

Cracker, which is resistant to clubroot, also has a 9 for light leaf spot resistance. “Cracker is a significant step forwards, as it has a gross output of 103%. The only other clubroot resistant variety, Mendel, was down at 94%.”

However, it shouldn’t be seen as a cure-all, he warns. “It’s important that these varieties are used correctly, as they share the same resistance mechanism. There are strains of clubroot that can break the resistance.”

• For more HGCA Recommended List 2012/13 coverage including early reaction and analysis of the changes, see our dedicated web page