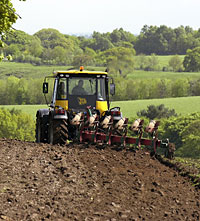 A well thought out capital budget will help any business prepare and cost its machinery replacement policy much more effectively. Suzie Horne reports

Labour, power and machinery costs offer the greatest scope for bottom 25% producers to cut wheat production costs per tonne. Property and admin costs should also be a target, but account for a much lower overall proportion of cost.

Grant Thornton’s latest farm business survey analysing results from the 2007 harvest, shows top and bottom performers are relatively close on variable costs, with the bottom 25% spending about 10% more than the top 25%.

This shows that more time and thought should go into budgeting and planning machinery costs, use and replacement, says Gary Markham, director of agriculture with Grant Thornton.

The challenge is heightened by the cash-flow demands of paying tax on better profits from 2007 and 2008 and massively increased costs of growing the 2009 crop. It is this combination which will threaten the viability of some businesses later this year and which is why they should spend more time on cash flow and machinery replacement planning, he warns.

Delayed machinery replacements due to low profitability or lack of cash can lead to several machines needing replacement in a short time, which puts extra pressure on the business.

“Using a capital budget should help avoid these problems, allowing you to plan replacement policy and cash requirements and give you an indication of the level of investment in machinery in the business.

“Most arable farming businesses have capital invested in machinery of about £230/acre. When we set up machinery syndicates we usually have a target capital value of £180-190/acre.

“A capital budget forces you to realistically calculate and judge the long-term demands on the business, alerting you to large expenses and allowing you to plan cash flow and borrowing.

“It also puts you in an informed position, allowing you time to look at all the alternative ways of using and acquiring machinery and how to fund these alternatives.”

A capital budget should cover about eight years, catering for the life of most machinery in arable businesses.

The tax treatment of different funding options varies, so this must be examined before making decisions:

“Different machines depreciate at different rates, so make sure your accountant is using realistic rates,” says Mr Markham. The wrong rates can distort the true picture.

A typical actual rate of depreciation for a combinable crop farm would be 18% a year, which is the weighted average rate at which the machines are falling in value, he says.

The peak July-to-October workload on most arable farms is where most of the labour and machinery costs are incurred, so this must be as efficient as possible and should be under regular review.

This category accounts for 40% of total production costs per tonne under a typical arable farm structure. In some cases it may be more profitable to minimise peak workloads by planting some lower gross margin crops, rather than maximising farm gross margin, which has traditionally been the aim, although in practice the best outcome will be a balance between these two aspects, says Mr Markham.

Changing the balance of cropping between spring and autumn is one obvious way to even out peaks. Working down the previous year’s set-aside early and leaving stubbles to regenerate might be part of this.

Running one large combine rather than two smaller machines could release staff for cultivation or other work, or allow labour costs to be cut.

Alternative sources for labour and power should be considered. too; for example, using machinery rings and contractors. This can only be assessed properly if you know how much your own machine is costing you to run. This should be calculated using a machinery costing sheet for significant individual items of kit.

This takes the purchase price less the expected selling price at the end of the period for which you expect to retain the machine. By dividing this between the number of years you expect to keep the machine, you can calculate the annual depreciation. Then add insurance and interest costs and estimate the workrate to arrive at the fixed cost per hour or per acre.

The next stage is to add operating costs, including labour, fuel, spares and repairs to get the total annual operating costs per hour or per acre. These are the figures you need to be able to compare machinery ring and contractor prices with your own operating costs.