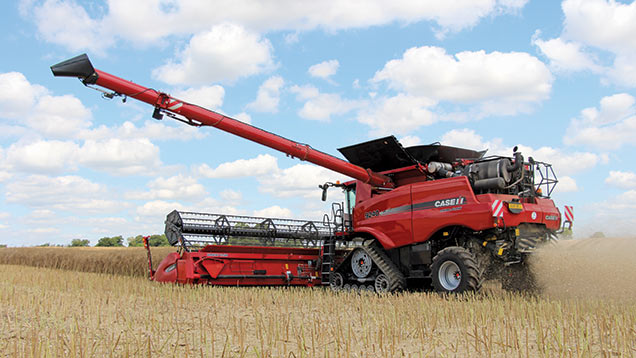 Case-IH has revamped its Axial-Flow 140-series combines giving them cleaner-burning engines and a leveling system for hillsides.

The smaller 5140 combine now comes with the same 6.7-litre FPT engine as the biggest Puma tractor, which develops 312hp.

Drive in all models is supplied by a two-range hydrostatic drive, each with two speeds. There are two options, standard and high-spec, which allows the operator to select high and it will change between high and low automatically.

To deliver more performance, engineers have also upgraded the feeder house by increasing the number of slats in order to feed more material, faster.

The stone-trap has also had an overhaul. Instead of a straight rotor with paddles, there’s now a spiral rotor that is able to run faster with more draft.

With a rotary combine, one major benefit is being able to change the concave, explains harvesting product specialist Paul Freeman. “Before, there were three concaves, each weighing in the region of 35kg.”

Not surprisingly, operators grumbled about hefting them in and out. Now each has been split in half leaving six individual concaves, weighing a rather more modest 17kg.

“The overall area hasn’t changed,” he adds. “Now, it will take one man perhaps an hour to change all the concaves, and only 20 minutes to change a couple, rather than it taking two men a morning.”

What this will mean, according to Mr Freeman, is that operators will be able to swap and change concaves more readily in the field, with the header trolley housing the various options.

For those growing their own seed crops or perhaps with a blackgrass problem on one part of the farm and not another, there’s a useful ‘clean’ function selectable from the cab on the AFS Pro 700 monitor, fitted as standard.

This allows the operator to turn up the fans and blow out the combine yet still return to the previous settings. Both 140 and 240 ranges have this facility.

Two panels reveal the entire threshing system, and the auger speed has been increased from 270 to 300rpm. A sixth auger has also been squeezed in with separate troughs underneath, rather than just one.

“The X-Flow cleaning system is a completely new development for the 140-series and bears no relation to the system found on the larger machines,” explains Mr Freeman.

It acts on the top sieve and is electronically controlled to be effective on slopes of up to 12deg. A sensor in the cab area registers the degree of slope in either direction.

This sends a signal to the hydraulic ram, which pushes the sieve further to the right or left in increments.

“Every degree of tilt is mirrored up to 44mm to the right or 44mm to the left, giving a total of 88mm travel altogether.”

Existing users complained about engaging and disengaging the chopper, which used to be an entirely manual affair.

Now, it’s hydraulically driven and engaged via an electric button on the side of the combine. The whole unit also swings out to give easy access to the rear.

The belt to drive the straw chopper has gone in favour of hydraulic drive.

The pivoting spout, which won an award at the Cereals event where it featured on the 240-series, is now available on the smaller range.

There’s also a larger 127t/hr elevator rather than the old 80t/hr before, and it’s been repositioned more vertically so drivers can get to the back of the concaves with ease.

Case IH has also approved Zuidberg F-type tracks for the 140-series, which are available in 30in and 24in options, the 30in option bringing the width of the machine to 3.4m.