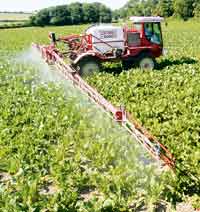 An outbreak of the sugar beet disease cercospora has been found in weed beet at Woburn, Bedfordshire, by researchers from Broom’s Barn.

The outbreak has prompted fears that the recent warm weather could cause the disease to spread rapidly.

Visitors to the Broom’s Barn open day last week were told to be vigilant, following a spell of temperatures above 25C.

“Certainly, the weather conditions are favouring cercospora at the moment,” confirmed research group leader Mark Stevens. “But one outbreak doesn’t mean that it’s widespread. At this stage, growers just need to be aware that it could become a problem.”

The most important sugar-beet disease in continental Europe and the USA, where it causes considerable yield loss, cercospora spreads during warm, humid weather.

“We’ve highlighted the possibility of the disease occurring for the past couple of years, given the trend for rising temperatures, but it hasn’t shown itself. But if it stays warm and humid, this could be the year that it does,” he said.

Infection results in the development of small brown spots on the leaves, which, if severe, can go on to coalesce and form extensive brown patches. Initially just 2-3mm across, the spots fade in colour as infection subsides, causing them to resemble ramularia.

“There are also other infections that cause brown spots to develop on leaves, such as alternaria, so there’s potential for confusion,” noted Dr Stevens. “If you suspect cercospora, samples should be sent to the Broom’s Barn Plant Clinic for confirmation.”

Growers starting to think about fungicide applications to control powdery mildew in the next couple of weeks should keep the cercospora threat in mind, he advised.

“Fortunately, the triazole/strobilurin mixes that most growers will be using work on cercospora too,” he said. “The powdery mildew forecast for 2010 is for 30% of the crop to become infected by the end of August, with the first symptoms being seen in East Anglia. Of course, a warm, dry summer will encourage its rapid development.”

The triazole/strobilurin mixes included products such as Priori Xtra, Escolta and Opera, he said. Spyrale is another non-strobilurin option growers could consider.

Hutchinsons agronomist Darryl Shailes pointed out that strobilurin-based programmes were very important for control of cercospora. “The discovery of this outbreak switches the emphasis. The strobilurins offer better persistence – products like Punch C only have some effect.”

He also highlighted the threat of brown rust. “It comes in later in the season, around August and September, but it can cause losses. And don’t forget that many growers are lifting later and for longer, which works in its favour.”