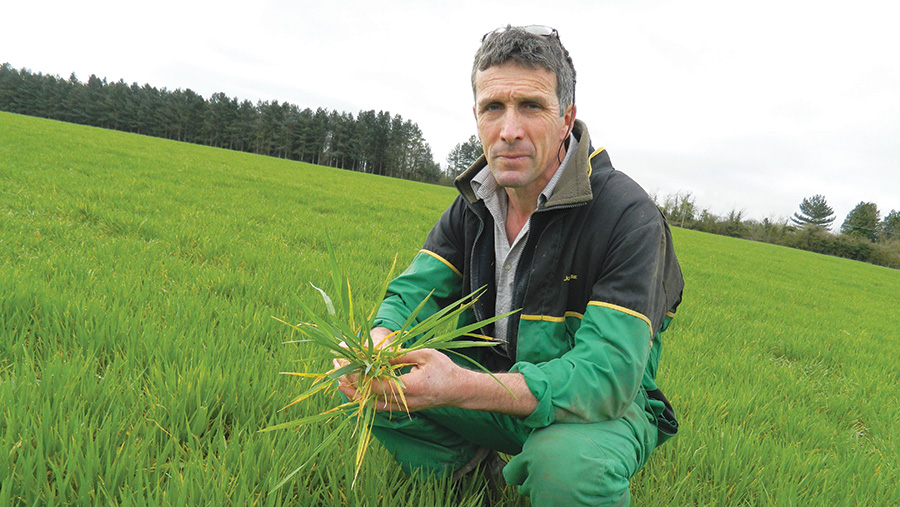 AHDB’s Wantage monitor farmer Julian Gold of the Hendred Farm Partnership still has some decisions to make about this year’s fungicide programme.

Just like other cereal growers, he is questioning the use of more expensive SDHI chemistry in the current economic climate and is wondering whether he can reduce costs and selection pressure by using it just once in the season.

“Last year we made a step change and included SDHIs twice, at T1 and T2, on all of our winter wheat,” he recalls.

“Yields were very good and proved to be the deciding factor in the farm making a profit, so it will be difficult to take a step back this year.”

Having said that, Mr Gold points out at current low grain prices, he is on track to make a loss on his winter wheat in 2016, which has a budgeted cost of production of £125/t.

As it stands at the moment, his planned five-spray fungicide programme will cost about £110-120/ha, before application costs.

“We’re capable of producing 12t/ha crops on this farm,” he stresses.

“If we only achieve average yields, we definitely won’t cover our costs.”

He is also aware of the threat of resistance developing to the SDHIs, so is keen to make the right decisions on fungicide use to prolong the life of the chemistry and keep all of the choices available for future seasons.

For this reason, multi-site protectants and triazoles are used in mixtures to full effect, with a further active in the form of a strobilurin possibly featuring in a mix at some stage in the programme, even though it will add to the final spray bill.

“All of our inputs are coming under scrutiny for their affordability, not just fungicides,” he admits.

“From our benchmarking group results, I know that my spray costs are lower than many of the other members, but I can’t risk becoming complacent.”

A further consideration for the coming season is his winter wheat and barley crops are already full of disease, after such a mild winter.

“I’m conscious that if we get it wrong early in the season, it’s very difficult to rescue a disease situation. The fungicides simply don’t offer the curative activity anymore, so it’s all about protection.”

As a result, his policy is to never have more than a three-week gap between sprays. He is very happy to play a waiting game until spraying begins in earnest.

“We always wait until the end of March or beginning of April before we apply the T0, regardless of what our neighbours are doing,” he says.

“It doesn’t matter how much disease is already in the crops, there’s no point in going on with an earlier spray and then having an unprotected gap later on in the season

“Getting the timings right is essential. We pay very close attention to spray intervals.”

As septoria is the main disease threat at the East Hendred Farm Partnership, Mr Gold bases his T0 on chlorothalonil.

“It’s cheap and cheerful. It does the job that we ask from it.”

However, he is less certain about product choices for the T1 spray.

“Last year, I used an SDHI with a triazole plus some chlorothalonil.

“But I’m questioning whether I should do the same this year, or whether I can do without the SDHI component.

“It would save about £8/ha and wouldn’t put the SDHI under more selection pressure.”

That decision will be made nearer the time, he admits.

“If it stays wet and disease pressure continues to mount, we may have to include an SDHI at T1.

“On the other hand, six weeks of dry, settled spring weather will change everything and take the pressure off.”

A T1.5 treatment was made across the whole farm in 2015 and Mr Gold is planning to do the same again this year.

“It’s in my head now. I accept that it is another spray pass, but it is only chlorothalonil based.

“I’m convinced about the role that multi-site protectant fungicides have in helping to protect crops. At T1.5, it’s protecting leaf two from infection.”

At the T2 or flag leaf timing, he expects to use an SDHI/triazole mix, either with or without chlorothalonil, while at T3 his plan is to apply prothioconazole + tebuconazole.

“All of our wheat gets a T3, both feed and milling varieties,” he says.

“It’s expecting an awful lot of the T2 to make it last until harvest.”

Planning for unpredictable weather at the start of the year is difficult, he points out.

“The season will have a bearing on what we actually do and how much fungicide is applied, although that’s most likely to be tweaks on rates rather than a drastic change in policy.”

Varietal resistance isn’t being fully exploited on the farm at the moment, he admits.

“There may be opportunities on later-drilled, more resistant varieties to cut back a bit.”

His winter barley, which is grown on a malting contract, usually receives three fungicides.

Again, spray intervals are key, with every effort being made to avoid any gaps.

“I coat the ear with prothioconazole at GS57-59, so the other timings are based on working backwards from there.”

That means the first spray of bixafen + prothioconazole goes on at late GS31, followed by the second at GS33-39, which also contains the growth regulator Terpal.

“We get a much better effect from the Terpal by applying it at this timing, rather than at the end of stem extension,” he explains.

“There’s no compromise with this approach.”

This year, disease is already present in his winter barley crop, especially rhynchosporium, making him think about the need for a T0 spray for the first time.

“We haven’t done it before and it would add to our costs, which is something I would rather avoid.”

He is also reluctant to put any further pressure on prothioconazole, which features in all three of his planned barley sprays, and is still performing very well.