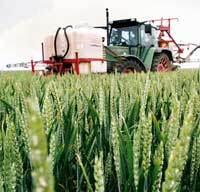 Contract farming results released by Bidwells Agribusiness at Cereals 2009 show a 15% increase in net profit for the 2008 harvest, to £552/ha (£223/acre) before payment of the farmer’s prior charge.

The majority of agreements award the contractor 70% to 80% of the first tier of any surplus after paying the farmer’s prior charge, the contracting fee and variable costs.

Most agreements now include a second tier of profit shared on a 50/50 basis and a handful go to a third tier, which swings back in favour of the farmer to account for the odd year of exceptionally high profit.

The average cost of contracting across all crops and land left fallow or in stewardship fell slightly in 2008 to £236/ha (£95/acre). This is the second year of reduction, although in general contracting rates are increasing, says David Cousins, head of farm management at Bidwells Agribusiness.

“Agreements that were negotiated in the run up to harvest last year generally saw an increase in the contract rates in response to the rising cost of fuel oil and many now include a sliding scale for contract rates dependent upon the fuel price. Average cost fell in 2008 because the area of sugar beet and root crops within the survey has fallen.

However 2008 saw greater than usual variability in results across farms in yield and quality, depending on location, soil type and weather pattern, and in financial terms depending on when crops were sold.

Cereal yields were some of the best on record, particularly on lighter land. That the majority of grain had to be dried was a tremendous challenge to an ageing and perhaps inadequate farm storage infrastructure, says Mr Cousins. “It was not only wet but higher volume and stretched all the logistics.”

Cropping is dominated by cereals and oilseeds and although some farms in the sample grow roots, the results for 2008 reflect a slight drop in this acreage. Results include Single Farm Payment and Environmental Stewardship Scheme income relating to the land within the agreements.

A weaker sterling meant Single Farm Payments on average were 14% higher in 2008 than 2007, but as a proportion of net profit, the SFP was constant at 40%. While total income increased by 15% over the year, variable costs increased by 16% and gross margin by 14%.

Looking ahead, Mr Cousins is clear that there is room for some confidence that wheat prices will rise.

“Food security remains at the top of most political agendas. World supply and demand equation effectively moved from deficit to surplus in one season on the back of the 2008 harvest and it is this fine balance and the fact that world stocks have become so depleted in recent years that underpins market price volatility.

“The credit squeeze has not affected production in UK to the same extent as some regions, where securing inputs in the absence of cash and credit is a real problem, for example in Russia and the Ukraine.”

Other factors influencing future performance include: