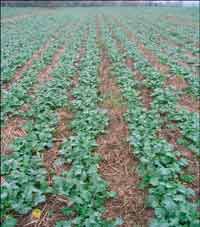 Government must spend more to ensure the fruits of “blue skies” agricultural research into plants do not rot unused, warned the BSPB.

At least £20m a year was needed to help those fruits ripen commercially, estimated chairman Thomas Joliffe. The reason was a serious imbalance between the funding of basic plant science and support for translating its findings into useful crops and varieties.

Dr Joliffe warned that without extra investment much valuable research to help address politicians’ new found but welcome concerns about food security risked never seeing the light of day other than in scientific papers.

“Commercial plant breeding is the only route to market for such improvements.” However, the income from seed royalties was insufficient to exploit them, he pointed out.

One example was the recent John Innes discovery of the key to pod-shattering in oilseed rape. “It’s of no use to breeders unless we can get it into a breeding line – only then can its promise be realised.”

In the late 1980s the Barnes report had advocated a move away from public funding of so-called near market research.

Since then researchers had hardly dare mention the word “yield” in project submissions, said Dr Joliffe.

DEFRA LINK funding for work that had pinpointed wheat varieties’ resistance to orange blossom midge was only forthcoming because of its potential to help growers avoid unnecessary spraying, not raise yields.

Now the pendulum had turned. “Improving productivity is essential.”

So a new BSPB working group had been set up to focus on closing the funding gap between basic and applied research. One of its key tasks was to seek clarity from the government’s Technology Strategy Board on the role and future of LINK funding.

The TSB had a three-year budget for a whole range of industries of £1bn, besides which £20m a year was trivial, Dr Joliffe believed.