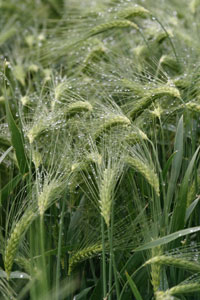 New wheat varieties face some stiff competition from established types, but the competition is hotting up.

Growers are sticking with popular varieties that have become increasingly prone to yellow rust, but only if such choices continue to pay the bills, says Dave Robinson, northern regional agronomist with NIAB TAG.

“Varieties with well known disease issues, such as Oakley, Solstice and Viscount, are still around and being grown. The key consideration is whether they will continue to yield.”

Bioethanol plants in the north east are helping to focus attention on variety choice, he comments. “It’s better than growing for the national pot, which is far more difficult to read and tends to be out of growers’ control.”

For now, these plants want consistency to ensure processing runs smoothly. “That means potentially suitable new varieties, such as the soft Group 4 Beluga, will have to be grown widely to gain acceptance.”

Clare Leaman, cereal variety specialist with NIAB TAG, sees Beluga as a useful addition which will help growers to manage the yellow rust risk, especially where Viscount has been grown. “It has high yields and stiff straw – just watch out for brown rust.”

Both commentators share the same view of Oakley. “Don’t grow too much of it. If it produces the yields, then it’s fine to stick with it,” Mr Robinson advises. “But be realistic about what you can achieve with the sprayer.”

Other Group 4 barn fillers worth considering include JB Diego and Grafton, says Mrs Leaman. “JB Diego is a strong contender and has proved itself to be consistent and versatile. It is also a good second wheat, as is early-maturing Grafton.”

Mr Robinson notes that early maturity is becoming a selection factor, especially where growers concerned about the viability of winter barley are seeking an alternative.

“This is where Cordiale has a place. It has a ready market and it is sound to grow. Other Group2s are late and don’t pay much of a premium.”

Mrs Leaman agrees. “Cordiale has both the quality and the market. It’s difficult to see why growers would change.”

The arrival of Invicta and Warrior in the Group 3 category is good news, she believes. But they have to prove themselves both on farm and with end users.

“It’s time to move on from Claire and these are worth a look. Invicta has grain quality similar to Robigus, but it’s less risky. Warrior’s disease resistance will suit some, but markets are more limited.”

Last year’s addition, Scout, will be in demand, she predicts. “It’s a good variety with the desired grain quality – it’s closer to Claire than the two new choices. And the millers will have more experience with it.”

Further north, Group 3 varieties have to meet the requirements of the distilling industry as well, notes Mr Robinson. “And most don’t do both. So it’s a different market.”

Of the candidates, Mrs Leaman mentions two potential Group 3s, Target and Tuxedo, as well as two in the Group 4 category, Santiago and Stigg.

“The question with both of the potential Group 3s is whether they will yield enough,” she asks. “The hard feed type Santiago has very high yields, but it’s not the cleanest variety, while Stigg has rating of 8 for Septoria tritici, which is a good sign.”

Mr Robinson picks out Cocoon, a potential Group 3 with wheat soil borne mosaic virus resistance, one of two candidate varieties introducing the trait for the first time. “It’s also got other good agronomic characteristics, especially disease resistance. But the virus resistance may be ahead of its time.”

He also welcomes Stigg’s septoria resistance. “But it won’t be a no-spray variety. It yields 0.5t/ha less than Oakley, which is worth around £45-50/ha. Yield tends to be king with the Group 4s.”

Santiago gets a mention for its very good yield potential, but he notes its average disease resistance.

Newly recommended two-row KWS Cassia gets the thumbs up from both of our experts.

“If you’re selling off the farm, KWS Cassia is an improvement on both Saffron and Retriever,” notes Mr Robinson.

Mrs Leaman is also convinced. “Its only downfall is Rhynchosporium, but growers who have had Saffron before won’t mind. Otherwise, it offers a good specific weight and standing ability, both important characteristics.”

The malting varieties are at the mercy of the end users, she adds. “It’s early days for Winsome and Purdey – we won’t know for a while if they’re going to be used.”

Much will depend on where you’re selling, Mr Robinson believes. “Cassata is now the standard but Flagon also has a market. The newcomers look very similar to existing choices.”

Volume is their pick of the six-rows, although both highlight the candidate Element as a possible alternative for the following year.

Other candidates include potential malting varieties Vanquish and Blazing, as well as a high yielding two-row, Florentine, and a six-row, Escadre, with a high specific weight.

“Florentine is promising, but will have to yield well this year to outperform KWS Cassia,” says Mrs Leaman. “Escadre might be of interest to Sequel growers, as it has a similar specific weight.”

The most recent addition to the winter oats Recommended List, Balado, is a real step forward, offering a 9% yield advantage over the current most popular choice, Gerald.

“It has fantastic yields,” says Mrs Leaman. “It’s also stiffer strawed and has a good kernel content, so both growers and millers should be interested.”

However, Balado’s disease resistance is no better than Gerald’s, she notes.

For Mr Robinson, standing power is the key with oats. “Most contracts stipulate that you can’t use PGRs, so stiff varieties are essential. Balado gets a 9 for lodging and is only 92cm in height.”