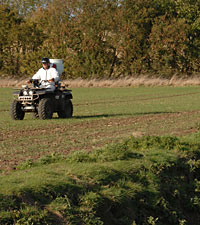 The withdrawal of 38 products containing over 700g of metaldehyde per individual application from the market is a step in the right direction, said the Metaldehyde Stewardship Group’s Colin Myram .

“There’s now a maximum individual dose rate of 210g of metaldehyde/ha,” he said. “Although the total dose rate for the calendar year remains at 700g, there’s also a new limit of just 210g between the key dates of 1 August 1 to 31 December.”

That’s because work has shown that 98.7% of the metaldehyde lost to water is through the drains, he noted. “The danger time is when the drains start to run. So that’s why there are new restrictions for the autumn period.

Where extra protection of water is required, the recommended rate has been reduced to 160g/ha or less, he added.

Other new advice which should be heeded this autumn is related to pellet application, continued Mr Myram. “There’s now a requirement to leave a 6m “no spread zone” adjacent to all watercourses. Last year, it was 5m.”

All the slug pellet manufacturers have tested their pellets through machines on quadbikes, with the result that they spread up to 13m on either side. “Add that to the no spread zone requirement and it’s clear that you should travel at a minimum of 19m from the edge.”

“Metaldehyde is used in 80% of the slug control applications and it has been found in water at levels above the accepted standards,” he pointed out. “The Environment Agency has been clear in its statement – that levels in water need to be reduced by 2011, or action will be taken.”

All growers have a responsibility, he ended. “If we have a wet August, slug numbers will build up.”