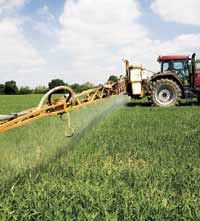 Sulfonylurea herbicides have given very disappointing results this season, with both grass and broad-leaved weeds surviving treatment, growers and agronomists at Cereals 2010 agreed.

Atlantis, Harmony, Ally and Broadway Star were all named as having performed below expectations, with visitors debating whether resistance or the weather conditions were to blame.

Rothamsted Research‘s Stephen Moss said growers would have to get used to greater variability, just as they’d seen before with other, older chemistry.

“Applied in good conditions, sulfonylureas will still give high levels of weed control,” he stressed. “But we know that their activity is dropping off, mainly due to the rise of enhanced metabolism resistance, so growers shouldn’t be too surprised.”

The weather conditions had played a part, he accepted. “It was too cold, then it was too dry. But in the case of blackgrass, it’s very important to spray in the autumn, if possible, when the plants are small. Pre-emergence herbicides and cultural control methods must be included too.”

Northamptonshire’s TAG agronomist Jon Bellamy reported variable results, but believed many growers were still under the impression that their herbicides had worked. “The weeds are hidden under the crop at this time of year. That gives a false impression.”

His colleague in Essex and Suffolk, Neil Watson, pointed out blackgrass had been recovering under the crop canopy, having absorbed nitrogen. “One thing’s for certain, we can’t afford to have another bad year.”

Nick Pratt, who farms near Downham Market in Norfolk, complained that both Harmony and Atlantis had been fairly ineffective. “In the case of Harmony, I’m wondering if there will there be an uptake now that we’ve had some rain. The Atlantis was applied in the third and fourth weeks of March on our farm, but it hasn’t done a good job.”

His one exception was Debut in sugar beet. “Fortunately, that’s worked well.”

Mark Hemmant of Agrovista highlighted the lack of rain as a likely cause. “For this chemistry to work well, you need active weed growth. And application technique is far more important than most people appreciate.”

He highlighted poppies as a particular control failure this year. “But we’re seeing far more blackgrass and ryegrass than we should be, given the effort and expense put into their control.”