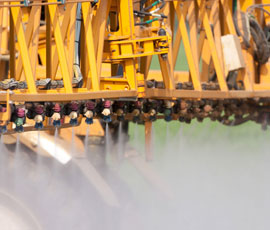 Dow AgroSciences has launched its new product for the control of blackgrass at Cereals 2012.

Named as Unite, it will compete with Atlantis as the mainstay of chemical control strategies.

“In addition to the fantastic blackgrass control, its strength will be excellent broad-leaved weed control and it will give you potential to reduce problem populations,” he added.

The product can be applied once in the autumn or spring at a field rate of 270g/ha, which equates to 18.75g/ha of pyroxsulam and and 10g/ha of flupyrsulfuron.

“Its other advantage is that it has a short half life so there is no risk when establishing oilseed rape or beans the following autumn and you can use any establishment method without worrying about crop safety,” said Mr Harris.

Mr Harris did urge caution however, noting that although it can stand up to Atlantis when used in a sequence to control blackgrass, it has the same mode of action.

“Therefore, where there are issues with resistance it will not solve the problem grassweed.”

Also on show for Dow AgroSciences at Cereals 2012 is a stronger formulation of Kerb. “Kerb 500 is a 25% increase in formulation strength of propyzamide, which will essentially reduce packaging and reduce filling time when applying the chemical,” said Tim Scott, productivity and strategy leader for northern Europe.

“We also have in development a Kerb product which not only provides the blackgrass control that growers require in their oilseed rape break crop, but also adds mayweeds, thistles and most importantly poppies to the control spectrum.”

Codenamed GF2540, the product is currently in the approval process and the company hopes to have it ready for commercial launch for Autumn 2013, added Mr Scott.