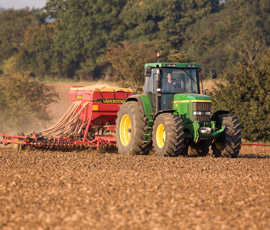 “This year has been the Armageddon for disease control really,” he acknowledged. “Early drilled Oakley in Northumberland has already had a T5 fungicide, and we’ll need a T6. But if it yields well, which it looks like it will, it will have paid off.”

Piecing together the jigsaw of management practices, including variety choice, is vital to avoid the pitfalls, said Limagrain’s Lee Robinson. The firm is issuing detailed management guidelines to support Horatio, its new Claire-replacement, this autumn, including nitrogen rates and timings, and seed rate.

Management pressures differ between north and south, and not just because early means August Bank Holiday in the north, but Sept 10-18 in the south, AICC agronomists added.

In the south repeat foliar BYDV sprays may be needed, even after an insecticidal seed treatment, noted AICC Hampshire-based agronomist Peter Cowlrick. “Deter gives the first six to eight weeks of protection, but rapid growth can soon dilute that, so we were back in with pyrethroid within six weeks, and again in late November/early December. Those who didn’t have up to 30% BYDV now.”

Disease control needs care too, including brown rust and eyespot. “We saw in 2007 how vitally important it is to use Tripod or Galmano seed treatment to remove brown rust inoculum, especially the aggressive new strains. Tripod also removes the basal internode, which assists with lodging management, especially early eyespot, like this year, visibly improving control.”

Mr Stephenson acknowledged early drilling contributed to the inexorable northern march of blackgrass. Control options needed exploiting, including in the preceding crop. “Making the most of propyzamide, with or without carbetamide, in oilseed rape is essential. We all know how rough seedbeds are not conducive to that.”

Learning how to manage varieties is also essential. “Every variety that comes to knock Claire off its perch hasn’t managed to do it yet.” But he was critical of HGCA ‘early-drilling’ trials sown on Sept 10. “It’s quite comical. We have wheat in the ground 10 days earlier.”

Claire led the way for a long time, and there’s really been nothing since to replace it, explained Limagrain’s senior wheat breeder Ron Granger.

It has yielded 10% ahead of Grafton in HGCA and Agrii early drilling trials, worth 1t/ha. It also performs well at later sowings, like Claire, Mr Granger added.