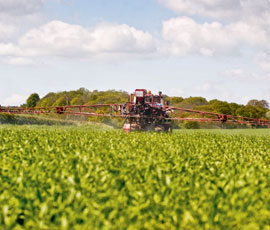 “Our straight triazole product Rancona (ipconazole) had inconsistent results in controlling leaf stripe in barley, so the addition of imazalil will address that,” said Keith Galley, regional seed enhancement leader for Chemtura.

“It should also be available for use in wheat for 2013, subject to approval, which will also provide improved control of fusarium seedling blights in the crop,” he added.

The other advantage of the product is its liquid micro-formulation that means the product remains at the same viscosity whatever the temperature, so application remains consistent and seed coverage is improved.

Mr Galley also points out that the dressing is extremely seed safe, resulting in no delay in germination and remains effective in various seed-beds and drilling depths.

“It is one of the few triazoles that don’t have negative effect on establishment and is also applied in low rates so has a good environmental profile,” said Mr Galley.

“It will be competitively priced when compared with other single purpose dressings, per tonne of seed dressed,” he added.