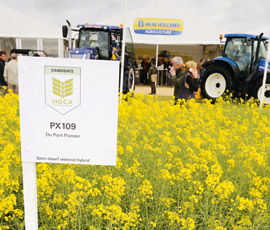 An expanding range of hybrid oilseed rape varieties was being exhibited by DuPont Pioneer at Cereals, led by the company’s top seller PR46W21.

Existing and future normal height, semi-dwarf and Clearfield varieties were all on display, with the highlight being the coded variety, which is the highest gross output winter variety on the HGCA East/West Recommended List.

“PR46W21 now has about 10% market share and has been so consistent for growers,” said Andy Stainthorpe, the group’s UK and Ireland business manager.

“We expect it to put in another good performance in 2013 and hold its market position,” he added.

Newly recommended variety PT211, which is on both the east/west and the north regional lists, is another stiff-strawed, normal-height hybrid.

“Where it differs from PR46W21 is in its better phoma resistance and its 5cm reduction in height,” Mr Stainthorpe said.

Also newly recommended for this year is PT208, which has joined the north list with a gross output of 105, and there is seed available for this autumn.

Candidate variety PX109 is a semi-dwarf that has set new performance levels for these shorter types, he said.

With a gross output of 104% and phoma resistance of 7, due to the RLM7 gene, it takes the semi-dwarf type into a different league.

“It also seems to offer better winter hardiness and doesn’t get damaged by pigeons as much as normal-height varieties,” he said.

“They’re both being trialled for the east/west region and give growers with a charlock problem a potential solution,” Mr Stainthorpe added.

See all the news from Cereals 2013