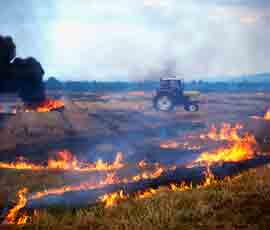 Cereals 2013 saw a debate on the possible role of stubble burning in blackgrass control. Richard Allison asked five visitors for their views as herbicide-resistant blackgrass increases

We used to all burn straw years ago and it used to do a cracking great job on giving you a good clean start. It controlled slugs and seemed to be effective on weed control as well.

Since then, although incorporating the straw back into the soil has given us some good benefits in soil health, there is definitely an argument for bringing it back.

I’m sure that if we went back to straw burning it could help with weed control.

But one issue I can see with it is that the last time we were straw burning we used to have 13ft combines and you could spread the straw over the whole thing and get a good burn.

Now we have got 30-40ft machines, getting a good even spread of straw that will burn may be difficult.

If you can’t burn the whole field you are not going to control all the weeds.

I have always been a fan of a return to straw burning and do believe that the fields were cleaner when we burned stubble.

I just don’t remember blackgrass being as big a problem as it is now when straw burning existed.

Some would say the loss of IPU is the reason, but I think a sensible approach to burning combined with modern chemicals would definitely see cleaner fields.

Surely, some well-supervised and justified burning would have a much lesser effect on the environment and help reduce agchem use.

We can still burn here in Scotland, but I haven’t done it for a long time now.

It makes a mess and I don’t think the general public will welcome any return to burning on a wider scale and the farming community needs to keep them onside.

If we get the resistance problems that growers are experiencing further south, I would seek to use cultural controls such as inversion tillage and stale seed-beds.

Weeds are an increasing problem and after several years of continued use, we could see a reduction in weed populations to an extent that we could drop some herbicide applications.

But I do have some reservations in bringing back stubble burning from an environmental perspective, particularly the effects on flora and fauna.

I’ve witnessed occasions in the past when it has gone wrong with hedges and in field trees burnt. There are also practical considerations for bird food margins.

The way I see the issue, we don’t want a return to the days of blanket burning straw.

We are aware of fields in some areas which are inherently very productive, high-yielding wheat land.

But because of the high population of herbicide resistent blackgrass, growers can no longer grow wheat in these specific areas.

A controlled and limited stubble burn could help bring these areas back into production.

There are also other benefits, including a reduction in pesticide use by lessening the carry over of disease inoculumn, trash and slug populations.

Yes, it is highly controversial, but we are not looking for a return to blanket burning, rather it is a specific tool.

We want to start a debate and carry out trials to assess the potential benefits from this approach.

It could bring environmental benefits such as reducing the reliance on pesticides for blackgrass control.