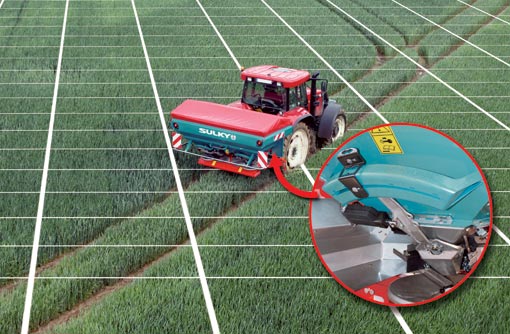 New fertiliser application technology on show at Cereals 2013 promises to cut fertiliser use by up to 10%, by increasing accuracy at wide widths and minimising overlaps.

Adopting the principles of sprayer boom section control on a spreader has not been easy given that fertiliser is broadcast from a central point, applied in up to four layers to achieve the required application rate, and thrown as far behind the spreader as to either side.

But the rewards for such a system include the potential to minimise waste and the effects of overdosing.

It all depends on how irregular individual fields are, but Kverneland, which put its GEOspread system on Accord Exacta and Vicon Rotaflow spreaders last year, reckons 2-10% savings are typical.

GEOspread is a high-definition system with adjustments made in 12 steps on either side – no more than 2m wide so 1.5m increments when spreading to 36m.

Other manufacturers do not go that far, believing six- or eight-step shut-off is adequate.

Sulky has opted for a six-step system with its Econov variable width control on the new X40 and X50 spreaders that will feature on Reco’s stand at Cereals. The French manufacturer’s X36 and X44 broadcasters already have Stop & Go, which automatically regulates on-off control when approaching and leaving a headland.

However, Econov is altogether more sophisticated, in that the working width can be altered in three steps on one side at a time or on both sides to minimise overlapping on short work, where tramlines approach the headland at an angle, and when working into a field corner.

“The machines can spread to 44m and 50m, respectively, and can deliver fertiliser at a rate of up to 520kg per minute,” says Stephane Billerot of Sulky-Burel. “So, high productivity is possible from fast working speeds even when generous application rates are involved.”

Different blades on new discs are used for the familiar Epsilon spreading principle employed on other spreaders in the Sulky range. The blades have a reverse E-shaped cross-section, with the upper half being a little shorter than the bottom one, so that two streams of fertiliser are produced from each of the two blades per disc.

Spreading width is altered by an actuator adjusting the feed-on chute either closer to or further away from the tips of the blades, so reducing or increasing the centrifugal force that sends the material on its way.

“With the Econov system engaged, the control box recognises when bouts are overlapping thanks to satellite positioning signals and a digital record of where spreading has already taken place,” explains Mr Billerot. “It then reduces spreading width accordingly in three steps on either side using the adjustable feed-on point mechanism.”

GPS-guided width adjustment and proportional flow adjustment are new features from Bogballe – and in this case, they can be used with existing as well as new spreaders with the Trend spreading system from distributor KRM.

Auto-Switch provides eight-section width adjustment across the 24-42m working widths that are available with the 700-4,500-litre capacity Bogballe LW2, M2W and MW3 spreaders.

“These machines have inward-spinning discs that both spread across the full width to build up the application in four layers,” explains Keith Rennie of KRM. “That means there is a high degree of tolerance to factors such as wind, uneven ground and variations in fertiliser that can affect the spread pattern.”

The new Vari-Spread system that will be featured by Kuhn for its Axis spreaders also provides eight-section width settings by powered adjustment of the feed-on point.

It incorporates Opti Point headland on-off management, which is also available as a standalone feature.

“In my experience, operators tend to switch on too early when departing the headland for fear of missing,” notes Norbert Rauch, whose company manufactures Kuhn spreaders. “Then the crop is more vulnerable to lodging and fertiliser is wasted.”

Calibration monitoring is handled by the electronic mass control (EMC) mechanism to detect whether the correct flow of fertiliser to the discs is being delivered for the required application rate.

EMC works by comparing changes in the pressure difference on either side of the hydraulic motor that drives each disc; the slightest reduction in flow from the hopper is detected as a change in the torque needed to drive the disc.

“It provides more consistent readings than weigh cells, which are affected by the machine being jolted,” claims Mr Rauch. “And if a rapid drop in torque is recorded, pointing to a blockage, the hopper shutter opens fully to release it.”

Also new for this year is electronic mass control for the lower-priced mechanical drive versions of the Axis 40.1. Changes in torque load are detected by measuring torsion in the drive shafts running from the central gearbox to each disc.

Sensor technology enables minute changes in angle between proximity sensors at either end of each shaft, which are detected if there is any change in mass flow from the hopper to the discs. The spreader control system then responds to maintain application rate.

Keep up to date with the latest from Cereals 2013