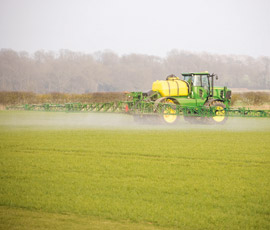 Omex has launched its new phosphite formulation Trigger, which claims to give an establishment and rooting boost to cereals and oilseed rape crops.

Applied from growth stage 14 in cereals and two to four true leaves in oilseed rape, the product has been independently proven to increase root weight, the group said.

These phosphite products were introduced to UK farms during the 1990s and formulations typically contain other nutrients and trace elements, adjuvants and wetters.

Trigger is made up of 4% nitrogen, 37.8% phosphorus and 17.5% potassium, and the manufacturer says it will be available this autumn to help growers in what will be a very important establishment period.

“We don’t recommend blanket applications, but where plants are under stress from drought, cold or wet it can help the plant develop a healthy root system,” technical development manager David Booty told Farmers Weekly at Cereals 2013.

There has been much debate about the value of phosphite products, and Mr Booty explained that plants have been proven unable to metabolise phosphite after it is taken up.

As such, the response seen after phosphite applications in crops is not nutritional, but a physiological effect within the plant.

The company sought to gain some hard evidence and work has been carried out at Nottingham University to prove the doubters wrong and look at differences between products and dose rates.

“There has been no work done by bodies such as ADAS to explore the value of phosphite product formulations, so we needed to justify their use,” said Mr Booty.

Wheat seedlings were grown hydroponically in plastic tubes filled with expanded clay balls, so the whole root system could be retrieved without damage after the experiment.

The plants were fed with Trigger and other leading phosphite formulations at various rates and root mass measured 21-25 days after application of the product.

The study showed all phosphite products gave an increase in root mass, but the Omex product gave the greatest response of up to 40%.

The product also stimulated the growth of an increased number of smaller roots that can enhance the plant’s ability to scavenge nutrients in the soil.

The study showed there was little to no response to Trigger beyond 1 litre/ha, which is Omex’s recommended rate for applications this autumn, with a water rate of 200 litres/ha.

This formulation is much simpler than others on the market, containing no other trace elements, so it proves most of the benefit is coming from the phosphite.

“Even the scientist that undertook the study was sceptical, but the study has completely won him over. Getting a good establishment will be key this autumn after two difficult years,” said Mr Booty.