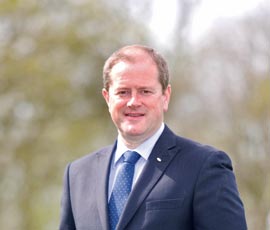 HSBC Agriculture is again very proud to be principal sponsor of the Cereals event. This year marks our 10th anniversary in this role, demonstrating our long-standing belief in, and commitment to, the industry.

I am sure Cereals 2013 will provide an important forum for discussion on crucial matters such as CAP reform, the marketplace and, as ever, the latest technology to be used in this increasingly important segment of UK agriculture.

Of course, I could not write this preface without reference to the unprecedented weather, which has influenced our farming over the past 12 months. This was heightened further by the very cold March and first half of April. It has affected all parts of agriculture right across the country, not only cereal growers.

The financial impact of these poor growing conditions will last well beyond the long-awaited improvement in the weather when the much-delayed spring finally arrived this year. Irrespective of farm size, or enterprises employed, it is the well-run business that will be best able to seize the undoubted long-term opportunities that still exist for the industry.

We do acknowledge that the short term will be much more testing than any of us have envisaged or experienced hitherto. Certainly, this farmer’s son of soon-to-be two score years and 10 has seen nothing like it.

As you know, this year’s practical farming production is next year’s cashflow. We think additional working capital requirements will continue well into 2014 for all sectors. We are already assisting many businesses across the UK with this.

HSBC remains totally committed to the industry, to help existing and new customers through these testing times by tailoring our services to each client’s needs.

By the time of the Cereals event we hope to have seen CAP reform inch over the line under the stewardship of the Irish presidency, and we may have seen a remarkable recovery in nature to compensate for what appears to be one of the slowest and coldest springs in years.

Our customer profile at Cereals shows it appeals to a wider audience than its title suggests. The different sectors of UK agriculture depend so much on one another, this year more than most.

We look forward to seeing you, whatever you may be farming, at this key date in UK agriculture’s calendar (stand 9-1-926).

Cereals 2013 host Patrick Dean is a private farming company based on the Lincolnshire limestone heath south of Lincoln at Mere. Farm manager is Alastair Priestley (below).

Crops: All established after plough with mounted presses.

Keep up to date with the latest from Cereals 2013