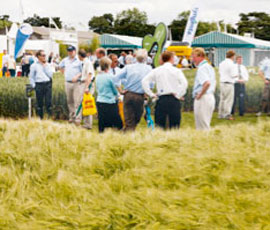 Patrick Dean Ltd is hosting the 2012 Cereals event. Here are some key facts and figures about the business – a private farming company based four miles south of Lincoln on the Lincolnshire limestone heath at Mere.

Farm Size: The business occupies 1500ha across three farms including the cereals site at Boothby Graffoe. Additional land is rented from the Ministry of Defence and neighbouring farmers for growing potatoes.

Soils: The limestone medium loams are very stony and, while free draining, can be sticky.

Average yield: 60t/ha. Annual production of potatoes is about 5500t of which 3500t are box stored in three up-to-date, fully environmentally controlled stores at Mere. All potatoes are graded and packed by Branston, a major supplier of Tesco and other retail outlets.


Average yield: 65t/ha. A Holmer sugar beet harvester owned and operated with H&J Neville and Son and Blankney Estates harvests around 1000ha of the host farms and neighbouring farmers’ beet each year.

Other information: Patrick Dean Ltd operates a pig unit on Boothby Graffoe heath which produces around 12,500 pigs a year at a slaughter weight of 78kg from around 520 sows. The pigs are sold to Woodheads at Spalding, where fresh pork is packed for Morrisons supermarkets. On the 500 ha of grassland in Scotland the business has 185 suckler cows and 750 breeding ewes. One 44t lorry is also run as a commercial haulage operation delivering sugar beet in the winter and grain in the summer.