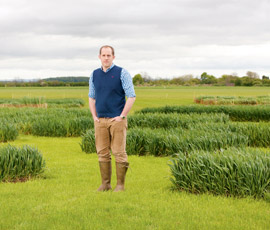 A rapidly expanding potato enterprise and a desire to reduce the mains water bill for a piggery were the key reasons behind the recent investment in water storage and the irrigation network at Lincolnshire farm business Patrick Dean.

These changes will be evident to visitors to the farm, which will be hosting the Cereals event in mid-June for the third time this year.

A 2m gallon holding reservoir and 6.5km of pipework have been put in place since last year’s event, opening up the land around the Cereals site for potato production and replacing the pig unit’s reliance on mains water.

Although it wasn’t the main reason for having a holding reservoir, supplying the 520-sow pig unit with irrigation water should bring an immediate cost saving of £20,000, believes managing director Alastair Priestley. He adds that the appropriate UV filters and equipment have also been installed, so that the water can be drunk safely by the pigs.

“Our annual mains water bill for the pigs comes to that amount, so there’s been an instant saving to the business,” he says.

“Two years ago, when the plots needed irrigating, we were carting water to the site,” recalls Mr Priestley. “Now we are in a position to do that much more instantly for potato crops being grown on the land.”

The past 12 months have seen the potato enterprise at Patrick Dean double in size, with the business also investing in a self-propelled potato harvester, he says.

The brashy limestone heath that comprises much of the land around Mere is known for its poor water-holding capacity and drought issues, even though much has been done to improve the soil by using muck from the pigs and nearby poultry units. Average rainfall is 600mm/year, while seasonal rainfall can be patchy, as last month’s total shows.

As on many other farms in the UK, there have been significant changes to this year’s cropping, most of which were driven by the weather, admits Mr Priestley.

“The very wet conditions meant we couldn’t get any wheat in after the potatoes and sugar beet, so we’ve had to tweak things.”

The main outcome has been a threefold increase in the area of poppies grown, going from 35ha up to 110ha. The crop is drilled in the spring and is grown on contract for Johnson Matthey, fitting in well after late-lifted beet.

“We would normally drill the poppies in mid-March, but everything is later this year, so they went in on 10 April. We’ve since had to irrigate them to aid germination.”

Another change has been an increase in sugar beet industrial contract entitlement tonnage with British Sugar. To Mr Priestley’s relief, sugar beet germination has been good and as expected this spring. “That’s not the same on many farms in this area, which is a concern. Those growers need to know what’s gone wrong.”

Currently, strong winds are proving a challenge to Mr Priestley’s agronomy plans. “It’s been dry, so there’s been plenty of opportunity to get up to date with our workload. But the winds are reducing our spray days and all the crops need attention at the same time.”

All the news from the cereals event