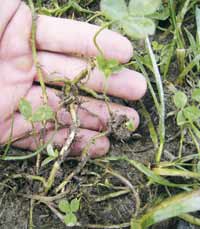 As spring looms, now is the time to be checking condition of white clover in swards to see how well it survived the winter, according to DairyCo extension officer Chris Duller.

He says although there won’t be any leaf material at this time of year, it’s important to assess stolon structure, as this is critical to the survival of white clover. Stolons act as the energy storage reserve for the clover plant as well as allowing the clover plant to spread. They are the creeping stems that spread outwards across the surface producing roots and leafing points as they go.

Mr Duller says when there are lots of stolons two or three mm wide extending out for 20cm or more with lots of rooting points, then plants are healthy and will cope with pressure of the coming grazing season. “But when plants are small with thin stolons and a few rooting points, there is risk that when they can’t be managed carefully this spring they could disappear altogether,” he says.

“Clover plants are sensitive to soil pH and P and K levels so a pH of 6-6.5 and P and K indexes at two are essential.”

Other points to consider include keeping any sheep away from vulnerable clover plants, rotational grazing which can encourage clover growth more than continuous grazing and not using too much nitrogen, keeping early applications to about 25kgN/ha.

In addition, because ryegrass starts growing at lower soil temperatures than clover, Mr Duller advises grazing off covers at about 2500kgDM/ha in early rotations to prevent grass from shading out clover.

“However, when you have a situation where clover begins to dominate the sward and there is a mass of large healthy plants then now would be the time to consider the reverse of the option stated previously and try and impose some pressure on the clover,” he says.