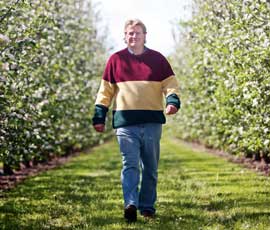 The world is waking up to cider, leading to a flurry of expansion in the apple orchards of England.

Brewing giants have rushed to tap into the boom as many beer markets stagnate. As a result more farmers are turning to the apple crop in the Herefordshire heartland of cider making.

Pear and other fruit ciders have added to the upsurge as the drink sheds its West Country farm-gate image and appeals to a younger, trendy drinker.

Cider sales have jumped 32% over the last five years to reach £2.7bn in 2012, and are forecast to add a further £1bn of sales in the next five years.

The world’s biggest cider maker Bulmers, now owned by global brewer Heineken, has nearly doubled the size of its apple orchards in the last 20 years just to keep pace.

The last round of tree planting finished in 2011 and as those take years to produce bumper crops, these new fruit trees will help feed the expanding market.

Farmer Duncan Matthews (pictured above) has switched his entire arable farm to growing cider apples during the last 17 years, backed by a 30-year supply contract with the cider maker.

Although some of his orchards have still to break into profit, mature apple trees can turn out a crop which can be worth close to £10,000/ha.

“It is more profitable than arable over a 30-year period and Bulmers say they will take every apple from the farm,” Mr Matthews says.

He planted his first orchard in 1996 on his 90ha Middle Brampton Farm at Madley, six miles south west of Hereford and soon caught the apple-growing bug.

A range of bitter sweet cider apples are grown across the farm – varieties such as Brown, Katy, Michelin and Dabinett – and all were heavily in blossom by late May. “I enjoyed growing my first apple trees and the plantings simply grew and grew to cover the whole farm,” he adds.

With Bulmer paying just over £100/t for apples, these top crops helped cover his costs for newly-planted orchards yielding under 1t/ha. The big cost is planting trees and grubbing them out when orchards come to the end of their productive life after 40-plus years, although there are plus points.

Mr Matthews can save on expensive arable machinery like combines, cultivators and grain stores, replacing them with mechanical pruners and small sprayers that thread between the trees.

Labour costs are higher than for his previous crops of wheat and potatoes as spraying is more time consuming and some manual pruning, he admits, is a “bugbear”.

Harvesting is fully automated with ripe fruit trees mechanically shaken and the apples picked up gently with what looks like a small-scale potato harvester.

He now has to contend with a new range of pests and diseases such as apple blossom weevil and apple scab, compared with his former grain and potato crops, but Bulmers’ growers development manager Chris Muntz-Torres is on hand to give advice.

Last season was a difficult time, as it was for many arable farmers, as a wet April resulted in poor pollination, followed by three months in the early summer when it hardly stopped raining.

Mr Matthews was attracted to apple growing during a Bulmers’ orchard expansion phase in the late 1990s, while a second phase ended in 2011, pushing the group’s total orchard area to more than 3,500ha

He is one of Bulmers’ 180 contract growers which together add up 2,600ha of orchards in Herefordshire and bordering counties. In addition, the cider maker owns five farms with 900ha of orchards.

Cider is the undisputed success story of the alcohol world in the last six years according to Mintel Research as cider’s advance came at time beer sales slumped by £2.2bn to £11.4bn.

The big upsurge in cider’s fortune came when Bulmers’ big rival Magners launched its products in Britain in 2005.

The following year a hot summer, football’s world cup and a multi-million pound Magners’ marketing campaign to serve cider over ice boosted cider as the new trend-setting drink of the summer.

Bulmers was quick to market its Bulmers Original within weeks of the Magners’ launch and prospered on the coat tails of the wider cider boom which saw British sales soar.

The Magners phenomenon soon attracted the big brewers with Heineken snapping up Bulmers-owner Scottish & Newcastle, Anheuser-Busch InBev launching Stella Cidre and Carlsberg getting into the act with Somersby.

Stella Cidre quickly became the No 1 modern-style cider ahead of Bulmers Original and Magners, while Sweden’s Kopparberg rose to the top of a new fastest-growing category – cider with fruit.

Bulmer, under its new Dutch owners, is the biggest player with a 43% market share of the British cider market; nearly one-third of all cider pints consumed are of its top brand Strongbow.

The boom has also encouraged the expansion of local producers, such as Aston Manor, Thatchers, Westons and Aspall.

Back at Bulmers, the head of cider milling Martin Keene says more than 90% of its apple supplies are locally grown and he oversees the 12,000 tonnes of apples that arrive each week at harvest time.

The world’s four biggest brewers, which account for more than half the beer made in the world, are all expanding in the growing cider market. Although the cider market is only a tenth of the world beer market, it is particularly attractive in the largely flat western beer markets.

Anheuser-Busch InBev – By far the world’s biggest brewer with brands like Budweiser, Stella Artois and Beck’s, the group entered the British cider market with Stella Artois Cidre in the spring of 2011, backed by a massive marketing budget. The Belgian-based brewer makes the cider in Belgium and exports it to the UK.

Heineken – The third biggest brewer bought Bulmers as part of Scottish & Newcastle’s British business in 2008 to make it the largest cider group in the world. The Amsterdam-based brewer, which makes its eponymous beer, John Smiths and Amstel, expanded further in mid-2012 with the purchase of Belgium cider Strassen.

Carlsberg – The Copenhagen brewer – ranked fourth in the world – introduced Somersby cider to Britain in July 2012, and has launched a £10m market campaign to boost the brand this year. The Carlsberg, Tuborg and Tetley beer brewer first tapped into cider in 2007 launching Somersby in its native Denmark and also Sweden.

For more on arable coverage go to Arables page