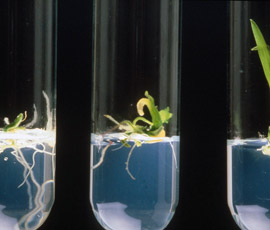 Key industry bodies have backed DEFRA secretary Owen Paterson’s positive stance on GM crops and his bid to get the issue higher up the political agenda.

Mr Paterson’s high-profile speech, which saw him argue that the government had a responsibility to explain to the public that GMs were a “safe, proven and beneficial innovation”, has been backed by The Country Land and Business Association (CLA), Agriculture and Horticulture Development Board (AHDB) and NFU.

The CLA said a negative misrepresentation of GMs had led to the issue losing scientific objectivity and becoming a political topic.

It believes the potential benefits of GM are huge with the UK being the natural home for GM research.

CLA president Harry Cotterell said: “GM isn’t the only solution to food shortages but technological innovation has always been at the heart of UK agriculture and it needs to be part of its future.

“Consumers, farmers and landowners should be given the freedom to choose whether they consume or produce GM.”
CLA president Harry Cotterell

“Consumers, farmers and landowners should be given the freedom to choose whether they consume or produce GM.”

“Moving from the positive rhetoric to a strategy for enabling R&D, regulatory approval and commercialisation must be the next goal. Clearly Europe is a major stumbling black, but solutions must be found quickly if the UK is to deliver the showcase of innovation and productivity that the forthcoming agri-tech strategy is all about.”

“Our interest is not about GM as a single technology but having all the best tools available to address many challenges farmers face in increasing productivity sustainability in all sectors as part of the global supply chain.”

However, the Soil Association said they felt that Mr Paterson’s intentions towards GM technology would make it harder to feed the world.

“The British government constantly claim that GM crops are just one tool in the toolbox for the future of farming. In fact, GM is just the cuckoo in the nest. It drives out and destroys the systems that international scientists agree we need to feed the world.”

Campaign group GM Freeze adopted a similar position. It said it was writing directly to the prime minister asking a number of questions and challenging the UK government to justify its call for the relaxation of the EU’s GM regulations.

AHDB’s Jonathan Tipples questioned where the action would lead. He said: “There are two clear issues, first there is the research side and second, the public and their adoption of the technology and we need to separate the two issues.

“We should now be pushing the start button for research and run field scale trials to see what technology could be suitable for UK conditions. Let’s find out what works.

“I have talked to many US farmers using the technology and asked why they used it. They always replied ‘because it works.’ The can farm a greater area, at less cost, using less diesel and with less pesticide use.

“There are so many benefits and that is why they use it. It isn’t the case that farmers are being forced into it.”

He believes the issue of public adoption is one for the future. “Let us develop the products and then have the debate. There need to be potential benefits for [consumers].”