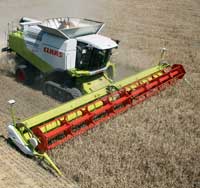 With the insatiable demand for bigger and better headers showing no signs of abating, Claas has introduced the 12m (40ft) Vario cutterbar, designed to accompany the company’s flagship combine, the Lexion 600.

Like the V1050 model launched last year, the V1200 features both a split reel and two augers, only now the knife is in two sections, driven from each end.

Claas has had a fixed 12m cutter bar in North America for some time, aimed at both soya and grain markets, but the Vario 12m is completely new.

The two knives now cut against each other in opposite directions to minimise vibration.

Dual synchronised gear drives on each side transfer power, rather than the belt drive used on smaller headers, while inside the shaft, rubber bushes provide driveline protection from any vibration.

The intake auger has increased from 580mm to 660mm to support both the extra throughput and weight.