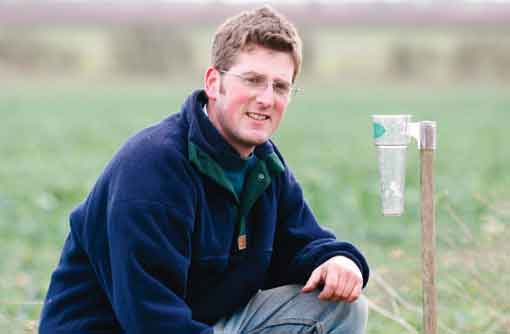 It strikes me that farming is becoming less about skill and husbandry, and rather more a game of Russian roulette. For instance you can apply fertiliser at the correct growth stage, yet its impact will be determined either by the leaching of the monsoon-like rain we have been experiencing; or if it is not raining, the fertiliser will volatilise during the drought.

Also we are expected to be experts in fields (excuse the pun) alien to us a few years ago. Recently the press were full of commentary on the forthcoming European elections. Disaster was being predicted because of the Greeks not being able to form a government, which they can’t; and the French electing the nice (let’s spend our way out) Monsieur Hollande, which they did. Consequently, the euro started plummeting.

Well, after discussions with the South West’s leading FTSE 100 dairy consultant, aka Dad, I fixed the exchange rate for the SFP. Whether we are right or wrong is completely out of our hands, but financial experts call it minimising risk.

With a Golden Dawn rising in Greece, there was a lime green one here the other day. After my spicy rhetoric expressing my devotion to my current Claas Lexion 480 (see my last entry) and how I would staunchly never sell it, a shiny new Lexion 580+ arrived yesterday. I was offered a deal I could not refuse and despite all my spreadsheets trying to justify not buying it, it was too tempting.

Having smugly had a full harvest team lined up months ago, it is with immense frustration that we have had one member drop out. It is understandable as he is chasing a lifetime ambition of becoming a jockey – but it is a tad inconvenient. So if any young students want a job as a straw rake/grain cart/roller driver, the email is below.