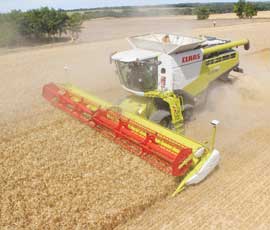 Called Cemos Automatic, it’s an upgrade of the original Cemos system launched in 2010 and will be an option on all 700-series Lexion combines, including the new flagship 780.

Now the only job left to the operator is pressing the laser pilot button to activate the system, lift up at each end and unload grain when necessary. All adjustment of the combine’s mechanism is done by sensors dotted throughout the machine.

The Cemos Automatic system is split into two sections. The first is a separation section, which controls functions like the rotor speed and concave position. The second is the cleaning side of things, which includes fan speed and sieve settings. The two sections can be switched on and off separately.

When engaging Cemos Automatic the operator can choose a preferred strategy, too. Maximum throughput is for those operating within tight weather windows, but there’s

also a setting for minimising fuel consumption and one for high threshing quality. A balanced strategy – a combination of the three setting that will probably be the most commonly used – is also an option.

Edward Miller, Claas steering specialist, reckons Cemos Automatic can save as much as 5% of harvest time. “Many farms are moving away from traditional straw- walker machines to hybrid versions to increase combine output,” says Mr Miller. “The Cemos Automatic system should help encourage operators to push the machines hard enough to get the desired performance.”

Claas says output on the Lexion 780 should be 10-12% more than that of the current 770. And given that the 770 broke the combining wheat record by harvesting 676t in eight hours, it should get through the crop pretty quickly.

Upping the output is partly the result of adding an extra concave to the threshing system. There are now six concaves under each rotor.

This change hasn’t taken up any more space though – the 770 had ample room for the extra concave, but did not have the power to use it. So the combine’s dimensions have remained exactly the same.

To cope with the greater throughput the Lexion 780’s grain tank capacity is now up to 12,500 litres and discharge rate is 1.3 litres/second.

As usual, Claas has chopped and changed engines to suit the job. On the Lexion 780 it’s a Mercedes Benz powerplant which uses SCR emissions control rather than the EGR system on the Caterpillar engines found in smaller Claas combines.

It has a new cooling system, too. The variable fan drive provides only the cooling output required by the engine, which Claas reckons can mean an average saving of 20hp as full fan rpm only happens under fully loaded conditions.

Unusually, the cooling pack lies horizontally behind the engine. This means there’s more space for a larger fan and 1.6m diameter filter.

It draws air in from above and forces it forwards towards the engine. A new louvre system then pushes the air sidewards through open panels, creating a curtain effect around the combine, which is said to stop the dust from rising and entering the cooling system.

One noticeable difference on the new combine is the monster rear wheels. With a 1.6m diameter to increase the footprint, the Lexion’s axle is suspended at four points to make sure the wheels don’t catch the combine’s body when turning. Other changes have seen hydraulic reaction time increased by 50%, while functions like auto-contour are said to be 200% faster.