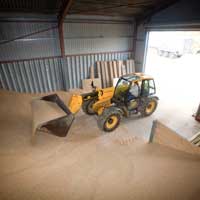 Cereal growers who have yet to clean their grain stores should do so in the next few days to ensure produce remains free from pests.

Grain store pest infestations increased by 45% last year due to the poor harvest and the abundance of wet grain going into store, says Mark Turnbull, managing director of Instore Solutions.

“Last year dryers were at full capacity and once grain was dry, growers struggled to cool it down quickly enough to stop pests moving in,” he says.

“There were also large quantities of wet grain waiting to get to the dryers, which warmed up and attracted pests,” he adds.

Jim Farquharson, managing director for B&W Grain Store Services also saw more pests and warns that hygiene is even more critical for affected stores, as insects will survive while they are empty.

“First the store should be thoroughly cleaned using a high pressure airline,” he advises.

“Pressure washers can be used, but water and electricity supplies don’t mix and stores can be incredibly difficult to dry out afterwards.

“Once the store is clean we apply K-Obiol liquid with hand lances and then fog the building with Pybuthrin to dislodge any stubborn pests.”

“Farmers should be cleaning out their grain stores as soon as possible; if pests are found insecticide will need to be applied and this takes 3-4 weeks to work effectively.

“As insects lodge in the smallest gaps and crevices, they need to be given time to venture out and come into contact with the insecticide. If the store is filled immediately, the likelihood of this interaction decreases and any remaining insects will readily infest the new crop,” says Mr Woolley.

“In the past I have seen grain tipped in sheds as soon as the insecticide is dry, which although safe to do, doesn’t allow enough time for the chemical to do it’s job,” he adds.