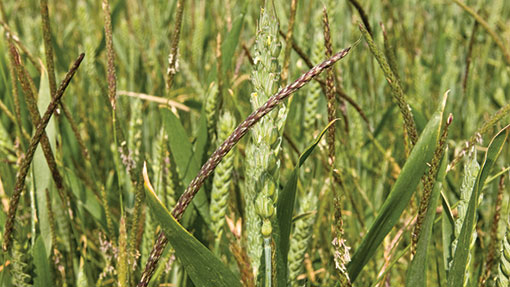 Weed-infested cereal crops can be sprayed off with glyphosate herbicide ahead of harvest to control weeds and also improve grain quality. Luke Casswell reports.

Wet weather has encouraged the extra germination of weeds and also secondary tillers to appear in some wheat and barley crops, threatening to delay harvest and heap more pressure on weed control.

Brian Ross, agronomist at distributor Frontier, says in areas where weeds have made it through growers’ herbicide programmes, glyphosate offers a good tool to go and clean up crops and reduce admixtures.

“It will help prevent the contamination from weeds, speed up combining and lower drying costs. You can also look at reducing in-field variability if you have issues with uneven ripening and secondary tillering,” he says.

Mr Ross points out that pre-harvest glyphosate also offers the best opportunity to control couch grass infestations, with post-harvest applications sometimes not as effective due to their poor take up.

Mr Ross urges growers to assess their crops for weeds and green matter and use glyphosate where necessary.

“This time of year weeds become very noticeable in crops so you will be able to get a good indication of what you’re dealing with. Thin crops will often be the ones under the most pressure,” he says.

Use of glyphosate will also help produce drier grain and reduce the time taken to dry grain, which will help reduce the chances of hot spots building up in store.

Mr Ross says treatments will need to be made seven days before harvest and when the grain is at a 30% moisture level or less.

Growers can measure this using a classic test, pressing their thumbnail into the grain and if the indentation holds, the crop is ready.

There is also the option of cutting 20 grains in half and if 75% have a dark brown pigment strand in the crease of the grain then the correct moisture level has been reached.

Timing is vital to prevent the grain from shrivelling up and affecting specific weight, and if growers go exceptionally early they run the risk of contaminating the grain with glyphosate residues.

Once the correct moisture levels have been reached, the glyphosate treatment can be used on both malting and feed barleys and also milling and feed wheats, although not in seed crops.

Manda Sansom, technical development manager at Monsanto, which makes the leading glyphosate product Roundup, says milling wheat growers can benefit from a pre-harvest application as it helps maximise the Hagberg number, which can drop significantly if there are many green tillers.

Rates of Roundup will vary depending on the weed pressure, going from 360g/ha for light annual grassweeds and 1,440g/ha for perennial weeds and where there are heavy infestations of tougher weeds.

Water volume will also vary from 80l/ha to 2,00l/ha, but Mrs Sansom suggests the lower end of the scale will suit most cereals.

“The important thing is to use low-drift nozzles and make sure the spray doesn’t get into neighbouring crops or hedgerows,” she explains.

Trials carried out by combine maker Claas showed using Roundup can increase the harvesting speeds by more than 40% when compared to an untreated crop.

There are a number of benefits in using glyphosate pre-harvest in oilseed rape as it can help control difficult weeds, speed up combining and evening up the crop.

Mrs Sansom says growers should select an area of the canopy, which is representative of the maturity of the majority of the crop rather than just the main raceme.

“Most growers will have been doing this anyway, but we have seen differences of up to 5% in moisture on different parts of the crop so the previous advice of taking it from the main raceme may not give a good representation of the rest of the crop,” she says.

Treatments can be made once approximately half a selection of 20 pods have seeds which are turning brown.

Growers using Roundup should then leave an interval of between 14-21 days before harvest, and Mr Ross says patience will be important in order to allow the spray enough time to be effective.