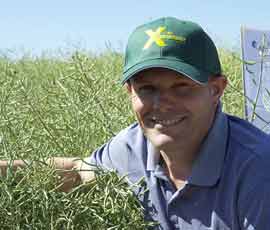 The first two Clearfield hybrid oilseed rape varieties to be registered in Europe were unveiled at Cereals by Pioneer.

Their introduction follows approval being granted for the BASF herbicide Cleranda (metazachlor+imazamox), to which only the Clearfield varieties are tolerant.

The varieties’ herbicide tolerance comes through a conventional breeding technique, rather than genetic modification.

However, the varieties – PT200CL and semi-dwarf PX100CL – won’t be introduced onto UK farms until 2012 at the earliest, allowing a further period of experience and trials.

“They both did well enough to get National Listing status,” he pointed out. “The yield penalty is around 3-4% less than current top selling varieties.”

Patrick Carruthers, Pioneer’s Europe oilseeds marketing manager pointed out that the Clearfield system allowed the use of a single herbicide application, gave growers a wider spraying window and, in the case of semi-dwarf varieties, meant that broad spectrum weed control gave the crop a more competitive advantage.

“It also allows the use of min-till cultivation systems with confidence,” he said.

Pioneer had experience with Clearfield varieties of sunflower and spring oilseed rape across Europe and in Canada, he continued.

“The herbicide tolerant crop sector has grown very rapidly in these parts of the world. Growers are finding that they bring them both practical and financial benefits. They simplify crop systems.”

Prices weren’t available at Cereals, but the plans are for the seed to be sold separately to the herbicide.