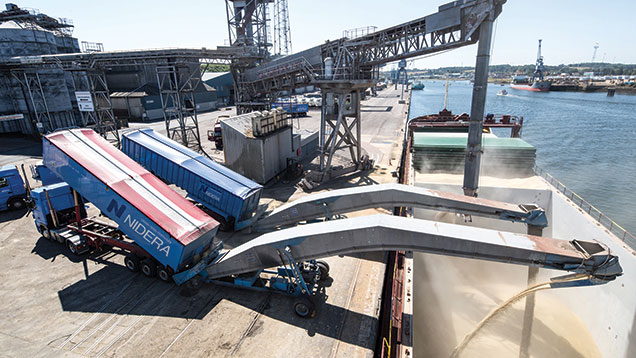 Arable farmers typically rely on agronomists and business consultants to advise on how to maximise yields and incomes.

But when it comes to actually realising those incomes through selling the grain, the outcome can be rather hit-and-miss. Get the marketing wrong, and it’s easy to undo all the effort involved in producing the crop.

With such a plethora of potential end users – from different export homes to large feed mills or niche local brewers, it is essential that farmers have the right merchant on hand to secure the best price and outlet for their grain.

And with global market volatility here to stay, perhaps it is time farmers developed the same consultative relationship with their merchants as they have with other key advisers.

“Farmers now are busier than they’ve ever been,” says Tom Barker, grain trader at Nidera.

“And the market moves a lot more, in a hurry, than it used to. With such volatile markets we need to keep farmers more informed about opportune times to sell.”

“It’s all about building a solid relationship based on trust.”
Tom Baker, Nidera

Modern technology means it’s easy to send regular market updates via email, or to alert farmers about short-term selling opportunities via text – but it’s also important to meet face-to-face every once in a while.

“It’s all about building a solid relationship based on trust,” says Mr Barker.

To help merchants secure the best markets for your grain, it is important that they know what’s in store. That means sampling grain, having an accurate idea of tonnages available, and some idea of price targets and loading capabilities.

“As a grain trader I see my role as advisory, working with farmers to find the best solution for them depending on cashflow and movement requirements,” says Mr Barker.

Having a good relationship with your merchant also means they can help you to choose appropriate marketing tools like options, minimum priced contracts, area-based contracts and so on. “Most farmers want to be in charge of their own marketing – it’s all about keeping them well-informed.”

Peter Allen grows 720ha of crops at Home Farm, Shuttleworth, Bedfordshire, as well as contacting for other local farming enterprises.

“It’s increasingly difficult to plan a grain marketing strategy these days as there seems to be little pattern to the markets,” he says. Having a good relationship with his grain traders and a basic understanding the dynamics of a global market are therefore essential.

To try and simplify the business, Mr Allen has put half of his arable acreage down to feed wheat.

“Focusing on one core crop makes life much easier both physically and financially,” he says. “Management and agronomy are simpler, storage and drying are the same and you can work out your gross margins much more easily.”

Added into the rotation are winter and spring barley, oats, and marrowfat peas – with oilseed rape now out of favour due to the lower prices and neonicotinoid ban. “It just didn’t stack up economically.”

Mr Allen sells most of his grain in the summer to attract early harvest premiums and help with cashflow.

“We’re lucky in that we have a usually early harvest and we can cut it, dry it and load it quickly to take advantage of any spikes in the market. The most we’ve ever moved off-farm at harvest is 500t in a single day – it was on the boat and away in a matter of hours.”

“It’s also important to be able to trust that merchants are acting in your mutual interest, and that they will move and pay for the grain when they say they will.”
Peter Allen

He also likes to make the most of niche markets, so relies on his traders to identify opportunities that make full use of his crop specification. In order to keep abreast of the market, Mr Allen receives weekly emailed reports, as well as communicating with merchants via phone and text.

“The first thing I need is an honest appraisal of the market in terms I can understand,” he says. “It’s also important to be able to trust that merchants are acting in your mutual interest, and that they will move and pay for the grain when they say they will.”

“One could be loading a boat, with the others taking into a local store on a different specification and price. Hopefully, I’ll always get the best price through a combination of gut instinct and taking the advice of two or three different merchants,” he says. “If I’ve been offered a good price elsewhere then the others will be honest and tell me to take it.”

Of course, occasionally things go wrong, and it’s how the merchant reacts to that which is important, he adds. “I did have one claim that didn’t add up, and Nidera came with me to see the end user: It’s important to have that support, so you can see that they’re in it for the long-run.”

Manor Farm’s central location in Harlton, Cambridgeshire makes it ideal for a supplying a variety of end users, so Edd Banks has to keep abreast of the opportunities.

“Markets react so quickly now and a single ill-informed decision can be the difference between profit and loss,” he says.

Growing 1,100ha of feed and milling wheat, oilseed rape and spring barley, Mr Banks aims to sell at least half the crop by the end of harvest, although it does vary.

“We know what we need to break-even so if we can get this covered and manage our cashflow needs early on we can then cherry pick the best of the opportunities.”

“You can’t hold all the information you need to in your head regarding crop protection so you build a relationship with your agronomist – and you certainly can’t understand the way global markets work so you need to a professional adviser for that too.”
Edd Banks

Dealing with Frontier, Nidera, Gleadell and Frederic Smart, Mr Banks reckons the key to developing a good relationship is give-and-take on both sides. “They need to look after us when there’s a problem, and we need to try and load at short notice if necessary – there has to be flexibility and trust,” he says.

This flexibility enables him to react to short-term market opportunities, although Mr Banks also sets target prices with his merchants, which can then be revised according to their advice.

“You can’t hold all the information you need to in your head regarding crop protection so you build a relationship with your agronomist – and you certainly can’t understand the way global markets work so you need to a professional adviser for that too,” he says.

“It’s hugely important – you spend all year trying to boost yields and save on costs, but you can lose a lot more than that by selling badly.

“For us it’s just an extension of our approach to adopting new precision farming technology. It’s a question of accepting progress, identifying what you need to make it work to your best advantage and then working with people who can make it happen.”