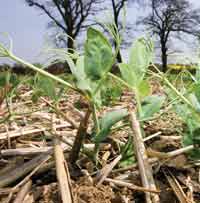 
Being unable to close the slot or gouge after the drill was one of the main reasons for direct drilling to fail, Steve Townsend told growers at a farmer-organised meeting for a prospective No-Till Alliance growers club.

“The main issue is not having enough tilth to close the slot. It leads to lots of issues, including slug damage.”

For growers using direct drill establishment, cultivation to produce more tilth wasn’t an option, the key was to build soil organic matter levels, he said. “I’m a big fan of chopping all straw residues on farm. It is an easy form of carbon. Carbon equals soil organic matter equals tilth,” he explained. “So don’t sell your straw.”

The advantages of not removing straw included helping reduce compaction, improving water retention and suppressing weeds. But there were downsides to straw, he acknowledged.

“Its tilth and soil fertility value is positive, but it is a great haven for slugs and some people say it has an effect on crop germination.”

That was due to something called allelopathy, he said. “Allelopathy is the effect of organic acids from the breakdown of organic residues on the germination of following crops.

“It can make crops look sick – it affects tillering and rooting.”

The key to avoiding it was to preventing seed-to-residue contact, he said. Drill choice probably had the greatest impact, with tine drills brushing the residues aside, rather than “hair-pinning” it into the slot as tended to happen more with disc drills.


Rotation could also play a part. It was well known that oats didn’t like following oats, and broadleaved weeds could be suppressed after rye cover crops, but more research was needed, he said. “We need to know more about what happens to our crops after certain crops.”

Allelopathy could also have a positive impact on blackgrass, he said. “The acids also affect weed germination, especially small-seeded weeds, if you leave the straw on or near the surface. It is why some farmers see a reduction in blackgrass when they direct drill.”

Sterile brome was the main grassweed threat for no-till, he believed. “It has a relatively large seed, which is relatively unaffected by organic acids, and it can come through straw.

“But its weakness is that it won’t germinate in ultraviolet light, so get it into the dark.”

Cultivation was the obvious method, but direct drillers could employ cover crops or use the straw residue to help achieve the objective of getting the brome to germinate so it could be taken out prior to drilling.

Spring cropping could also help with brome, he suggested. “If you leave stubble over winter you have the chance to break its lifecycle.”

Slug issues in direct-drilled crops were directly related to a lack of tilth, Mr Townsend said. In that situation even rolling didn’t really help. “Without enough tilth you cannot close the slot even when you roll, which is why slugs can eat the crops.”

That meant it might be worth cultivating in the early years to improve tilth levels, he suggested.

When there was enough tilth to make rolling effective it was imperative to use a heavy roller, he stressed. “It needs to exert at least 0.6t/m but no more than 0.8t/m.”