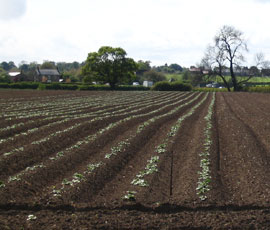 This winter’s cold weather is predicted to delay peach potato aphid pressure by a month, but rose-grain aphids will peak in July as usual, according to the Rothamsted Insect Survey (RIS) and SASA potato aphid forecasts for 2011.

Rothamsted’s Richard Harrington said that as most seed crops in Scotland and Yorkshire are planted by the end of April, there should be about a month free of peach potato aphid pressure, as they emerge in late May to early June.

However, rose grain aphids, which over-winter mainly as eggs rather than in mobile stages, will hardly have been affected by the harsh conditions so should be expected to start flying during May and build up to peak numbers in July as usual.

Research shows that rose grain aphids are the most likely vectors of the non-persistent viruses PVA and PVY. Last year, some areas of Scotland were overwhelmed with them and the incidence of PVY symptoms recorded in crops jumped to more than 15%, he said.

Bayer CropScience’s Bill Lankford says the implications for seed potato crops this year are that in-furrow treatments should not be required, as they are unlikely to persist through to the predicted late arrival of potato aphids.

“Growers will need to focus on control of cereal aphids for four to five weeks from crop emergence, and when the colonisers arrive, the twin threats will be best managed by alternating sprays of the systemic insecticide Biscaya (thiacloprid) with approved pyrethroids.”