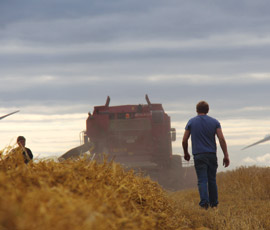 Harvest 2013 is proving to be a year of contrasts, with some record-breaking yields and others at the opposite end of the scale.

But the dry weather has made life considerably easier than in recent years, and many growers are putting the combine away for the final time this season.

In the south of England, harvest is almost complete, with most crops coming off dry, says Nick Matthews, trading director at Wessex Grain.

“Crops on the chalk have been outstanding – but some of the brash and heavier soils haven’t been great, with flooded or burnt patches,” he says.

“Most exports will be malting barley this year, not wheat. That’s probably a good thing because there is a ready market for malting barley,” Mr Matthews adds.

“We’re slightly disappointed, but following the waterlogged autumn and frozen spring, at one point we thought we wouldn’t be getting the combine out at all.”

Across in Norfolk, Simon Dann has finished harvest at Pound Farm, Tuddenham, with some very variable results.

“It’s been a mixed bag. The light land was very disappointing. But considering how the crops looked in the spring, it’s amazing where some of it has have come from,” he says.

“Everything’s off the field, the rape’s in the ground and somehow we’re now two to three weeks ahead,” he adds.

Further north, Keith Snowball has also made light work of harvest near Brandsby, Yorkshire, with spring barley combining far quicker than the wheat it replaced. Harvest is now about two-thirds complete, but yields have been extremely variable, he says.

Concerto and Tipple spring barley averaged about 5.7t/ha and produced a lot of straw, while spring wheat averaged 6.4t/ha.

In Northumberland, Carl Tuer is delighted with a potentially record-breaking harvest at Rock Farms, Alnwick.

“It’s just been fantastic. Yields are exceptional and it’s been a completely different year for us,” he says.

Harvest in eastern Scotland is about 60% complete, and although yields are close to average, quality is generally excellent, according to Robin Barron, general manager at East of Scotland Farmers.

Spring barley nitrogen contents are slightly high, at up to 1.9%, but maltsters have relaxed their specification from a maximum 1.65% to below 1.7%, he says.

“The physical state of the spring barley is better than we’ve seen for many years, without any of the skinning, sprouting and splitting that we’ve been getting in wet harvests,” he adds.

Further north, harvest has been a mixed affair, with spring barley burning off to yield just 4.9t/ha at Moray Estates, Elgin.

But in Turriff, Aberdeenshire, Sandy Norrie is delighted with potentially record yields.

“Some of the later crops won’t be so stunning, but it’s a pleasure to be working right now,” he says.

Harvest round-up: a finish in sight