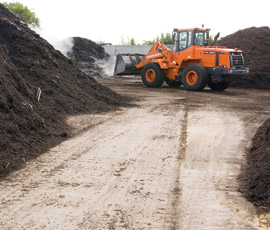 When green waste compost started being produced on farms and composting sites across the country it promised to be an excellent low-cost fertiliser replacer.

But rising prices, of a once very cheap product and questions over quality control have put many off, with some questioning whether it’s the “rocket fuel” to crops that some say it is.

On-farm composting, in particular, can suffer from a lack of quality with a high content of visible plastic often burdening the product.

Stricter guidelines, greater awareness from the public over what goes into kerbside collections, and improved screening processes, however, have prompted those in the industry to urge farmers to buy into the sustainable and environmentally friendly product.

With costings being one of the major concerns, it’s good to know where your money is likely to be spent when purchasing compost. According to trials monitored by WRAP (Waste and Resources Action Programme). when calculating the total cost, the purchase price broke down to 20-33%, haulage between 25-70% and spreading 20-45%.

Advice from experts is that if transport costs can be alleviated then compost offers a “exceptional” product with the benefits plain to see.

Fgsagri are one of the leading companies in the South East specialising in organic recycling, producing over 700,000t to 900,000t of recycled material each year. Compost and utility works manager Alister Bruford is a firm believer in the benefits of compost and its comparative benefits with fertiliser.

“We create an analysis from all our samples (right) so, for example, from our green waste with food included compost we can show growers that the application rate of this product (PAS100 compost) at 37t/ha is the equivalent of £550 worth of fertiliser.

“I know farmers are going to argue, well there’s £73.34 worth of phosphate there that we don’t need, but ultimately that’s what its worth and through rotation and time, we are able to balance the product to a degree,” he said.

According to environmental compliance manager Andy West, the old myths on high plastic content are also being addressed and it’s something they believe is happening across the country as people become more educated on what and where they can recycle.

“PAS 100 regulations have a maximum limit for plastic of 0.12%. For all contamination, so things like glass metal and plastics, it’s 0.25%. The material we produce has a plastic content of 0.05%, so 2.5 times under the limit.

“There is still an element of plastic, but what you find is a lot of this is the biodegradable plastics that take a lot longer to break down than they say, but they will go eventually.”

Mr Bruford concludes the main issue that farmers should be concerned about is transport costs, but the bigger companies are finding cheaper methods to alleviate this problem.

“We’re now using larger lorries that reduce the transport costs and allow us to extend our reach to people we can supply. I will talk to a farmer anywhere and as long as I can justify it to him and the prices add up for both parties, then I will go anywhere. There’s no “I’m not running further than 10 miles”.

Farmers are being advised to view the product as a long-term solution rather than an instant money maker, according to Mr West.

“It’s not just simply about the nutrients. Organic matter helps soil fertility and productivity. And just as biosolids it helps soil structure, moisture retention and reduces soil erosion. In terms of soil types its incredibly diverse in how it can help.”

Fgsagri contracts manager Bert Essink feels there has been a rise in popularity, which is largely due to the advancement in technologies and the better products available to growers.

“There’s always been a stigma on compost and sewage cakes. However, now water companies have cleaned up their act and companies such as ourselves have grown and advanced in how we operate, there’s less plastic in compost and very low metal content in sewage cakes.

“The machinery we’ve got and that many of the larger companies are using up and down the country have reduced soil compaction if anything, such is the technology that’s gone into them,” said Mr Essink.

Hutchinson’s agronomist Phil Styles agrees that the key for whether compost is worthwhile is down to the quality and cost of transport.

“Some compost is recent years has been screened poorly and not to a high enough standard. A 10-20mm screening will help produce compost almost as good as fertilisers and with a low plastic content.

Mr Styles also echoes the benefits of compost helping to replace vital nutrients in the soils as well as proving extremely useful particularly on heavy land in helping improve the workability of soil and help reduce the machinery wear.

With this year being the UK’s second wettest summer in 100 years, there will be legacy of negative effects on the soil for years to come. “Organic matter, soil structure and soil nutrients have all taken a big hit during these testing times. In a bid to get back on track, could compost be the reprieve farmers are after?”

Don’t waste chance to up yields with green compost