Will a switch in the emphasis towards consumer rather than farmer benefit be enough to swing public opinion in favour of genetically modified crops? Mike Abram investigates.

Could a purple tomato and soya beans that produce oil with a higher content of omega-3 oil be the turning point for GM crops in the UK and Europe?

They are among the first of a second generation of GM crops that concentrate more on providing consumer benefits than the farmer-based benefits of herbicide-tolerance or insecticidal crops.

Pro-GM groups hope the change in emphasis will start to swing public opinion in favour of genetically modified crops in Europe.

Europe has been almost at a standstill on GM crops for more than a decade. The 1998 approval for Bt-maize with resistance to European corn borer (MON810) was the last and only approval for a GM crop within the EU.

Last year about 110,000ha were grown in the EU, three-quarters of them in Spain. Compare that with the 114m hectares of mainly maize, soya, cotton and oilseed rape (canola) grown in the world by more than 10m farmers in 2007. About 120 GMO traits have been authorised for use on 23 crops worldwide. 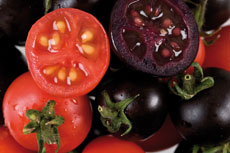 Just 16 of those have been approved by the EU so that those crops – and food and feed derived from them – can be imported into the EU.

Approvals go through the European Food Safety Authority (EFSA), which assesses safety to human health and the environment, before the EU farm council votes to approve or not.

In the event that ministers cannot reach a qualified majority either for or against – and that is usually the case – the European Commission has the power to authorise the GMO.

But the Commission remains hesitant to approve more GM crops. In May 2008, it referred decisions on the BASF Amflora potato, which would be used for industrial starch production, and three maize varieties that contain antibiotic resistance genes back to the EFSA for a further review of their effects on human health and the environment.

If Europe remains deeply divided on the issue, then so does the UK. Although at a national level, the UK government has sought to reopen the debate on GM crops in the wake of growing concerns over food security, the devolved governments of Scotland, Wales and Northern Ireland appear to be resolutely in favour of keeping their countries GM-free.

But is the balance of power shifting? Comments by two ex-DEFRA ministers have attracted the national press’s interest. Phil Woolas suggested the anti-GM lobby had one year to put up its arguments and Jeff Rooker attacked the movement as having a “messianic mission” to destroy GM technology, at a fringe meeting of the Labour party conference.

Unlike a decade ago, the coverage has also been relatively balanced, even faintly pro-GM in the broadsheets.

The food security issue has helped. The challenge for world agriculture is to double production within 30-50 years to help feed not just more people, but more people eating a meat-based diet. GM could be at least part of the answer, says Bob Watson, DEFRA’s chief scientific adviser.

GM proponents are also pinning their hopes on the recent announcements of a new generation of GM traits that will bring consumer benefits.

First, the John Innes Centre in Norwich published research detailing how it had inserted genes from a garden flower, the snapdragon, into tomatoes to produce antioxidants that could help protect against cancer.

Initial tests in cancer-susceptible mice showed that the mice lived longer if their diet was supplemented with the purple tomatoes rather than red ones. 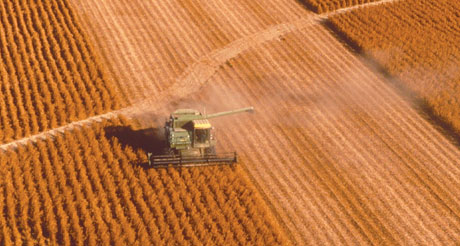 Non-GM maize in Slovakia: European corn borer attack has left it more prone to secondary fungal attacks, and the production of mycotoxins

Monsanto quickly followed this with news of clinical trials investigating the health benefits of a soya oil containing boosted levels of omega-3 oils. Omega-3 fatty acids are commonly found in oily fish, such as salmon, and are known to help fight cardiovascular disease. Clinical trials have already shown the oil boosts omega-3 content in the blood.

Tests are now being conducted on the stability of foods, such as spreads, yogurts, cereal bars, even ice-cream produced using the oil, says Colin Merritt, Monsanto’s head of new business development.

The breakthroughs could change the perception of GM foods, he suggests. “It is fairly obvious that direct health benefits in food are of greater interest to consumers from the rapid growth of the healthy food sector. At almost every meeting that discusses GM, people say direct consumer benefits are needed for people to choose GM products.” 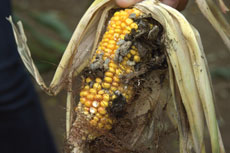 But the Soil Association‘s Peter Melchett does not agree. He insists that despite the possibility of consumer benefits, the fundamental arguments against GM crops remain: “It is an uncertain and risky technology.”

He points to two recent studies that claim to have produced health effects in mice fed with GM corn in Italy and Austria, as “studies that remove all doubt that there is a real possibility of a risk to human health”, although Monsanto says the results of the Austrian study were inconsistent and is questioning the methodology and its conclusions.

Those diametrically opposed views illustrate how far we still have to go before GM crops are grown in the UK. On the one hand, Lord Melchett argues that GM crops are inherently dangerous and responds with a flat “no” when asked whether he thinks GM crops will ever be grown in the UK, and on the other, Dr Merritt suggests consumers should be given the choice to try new products.

Prof Watson says it is difficult to predict how things might develop. “DEFRA’s role is to ensure GM crops are safe for human health and the environment. Beyond that, people will be able to decide for themselves whether to buy any approved GM products.

“If the EU approves new types of GM seed and they are marketed in the UK, you would expect that some of our farmers will at least want to try them out. The key issue will be what benefit the seed provides, and whether this will lead to market acceptance of the end product made from the crop.”

Is UK and European agriculture being held back without GM technology?

Keeping the UK GM-free is not holding back agriculture in this country, says the Soil Association’s Peter Melchett. “Benefits of not growing GM include we keep farming, we keep our customers and we keep our freedom of choice of whether we grow conventional, non-GM crops or farm organically.”

It also helps safeguard markets for products, he insists. “GM crops can be grown anywhere, and if a market ever did develop, they could be grown more cheaply in many other countries than England. Local production delivers new markets for UK farmers. GM commodity crops risks delivering our markets to other countries.”

Not surprisingly, Dr Merritt has a different view. The lack of approvals is already hitting research for GM crops specifically for Europe, he says. “We haven’t developed crops that we should have. We would love to develop omega-3 crops and nitrogen utilisation for UK crops, but it will take longer because of the approvals situation.”

Of more immediate concern is the effect on the supply of imported animal feed. Non-GM soya premiums have soared in the past year, from £5/t to £50/t at one point, as worldwide production of non-GM soya decreases. “That’s already causing problems in the poultry sector [where supermarkets demand chickens and eggs are fed on GM-free feed],” says Mr Merritt.

But slow EU approval decisions on new GM traits could also lead to problems with supply of feed [for other sectors], says DEFRA’s chief scientific adviser, Bob Watson. This is part of the reason why DEFRA is arguing for the system to be streamlined as far as possible. “There are delays that could be avoided, and therefore it should be possible to reach quicker decisions on GM applications.”

But Prof Watson doesn’t think the UK is necessarily missing out by not growing GM crops. “GM soya and cotton crops obviously don’t have any relevance for the UK, nor do we as a general rule have any interest in current GM insect-resistant traits, because we don’t have a problem with those insect pests.”