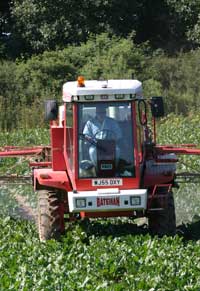 Sugar beet growers who aim to lift their crops after the first week of November can help to reduce the risk of frost damage by ensuring their crop is free from rust. But action may be needed sooner than usual.

Signs of the disease are already starting to show due to the warm and damp weather over the past couple of weeks, says Mark Stevens of Broom’s Barn.

Trials conducted last year at Broom’s Barn found that of all the foliar diseases, rust had the greatest effect on the susceptibility of beet to subsequent frost damage, while presence or absence of powdery mildew was shown to have little or no impact.

“The run of frosts we had between October and December in 2008 caused plants infected by rust to sustain high levels of defoliation; the higher the level of infection, the greater the damage became,” says Dr Stevens.

Once significant defoliation had occured, the crown was exposed and the root was vulnerable to further frost damage. “Crops with poor green leaf cover would have been particularly prone to damage when later frosts came in.”

Lessening the effects of these later frosts is therefore essential for any grower storing crops in the ground later in the season.

“If beet is going to be lifted late, good rust control must be achieved to maintain healthy green leaf cover,” says Dr Stevens.

“Growers should also be looking out for powdery mildew, cercospora and ramularia and adjusting their fungicide strategy to suit.

“If we are going to see several of these diseases, which we could, we would recommend a broad spectrum fungicide strategy such as Escolta (cyproconazole and trifloxystrobin), Spyrale (difenoconozole and fenpropidin), priori Xtra (azoxystrobin and cyproconazole) or Opera (epoxiconozole and pyraclostrobin).”

“It is important to keep a close eye on the crop and take appropriate action as diseases start to develop.”

If powdery mildew and rust are present, a sequence of flusilazole (Sanction or Punch C) followed by cyproconazole (Centaur) will give good control at a lower price, he says.

First sprays should be applied at full rate to ensure optimal control and offer some flexibility on timing if a second application is required, he adds.

“Early-lifted crops may get away with one spray, but given the weather should be monitored closely, although harvest interval should be noted; late-lifted crops will probably need a second application in the latter part of August, which should not be applied any later than mid-September.” The extent of disease development will be regularly updated in the weekly BBRO bulletins, he adds.

During trials, ramularia-resistant varieties such as Bullfinch, Goya and Bobcat showed the greatest susceptibility to rust and subsequent defoliation, said Mr Stevens.


Bob Rush farms 240ha of beet near Bury St Edmunds, Suffolk and has had good results applying Escolta (cyproconazole and trifloxysrtobin) to Goya and Bobcat in late July/early August.

Any crops lifted after the first week October also receive a second dose at the end August/early September.

“We have adopted this strategy for the past few years and have found it gives good protection against foliar diseases and maintains good green cover right up to the point of lifting,” he says.

“We are on heavy ground and try not to lift anything after the end of December, but at this point green cover has looked very strong since we adopted the two-spray Escolta programme.”

Neil Thompson, product manager for Bayer, says the ability for Escolta to maintain green leaf cover is not just down to disease control.

“The increased chlorophyll content shows that the product promotes healthy green leaf cover and development, in addition to controlling disease.”