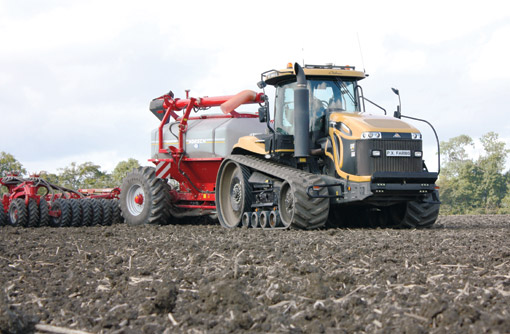 Most of the company’s machines are now compatible in terms of working width and wheel tracking, so they can fit the permanent tramlines that have been mapped across the 2,150ha of combinable cropping under the company’s care.

Managing director James Peck believes 12m is the ideal width for his CTF system. “It’s the maximum possible in western Europe due to folding and road constraints. PX Farms also has the scale needed to operate the machinery that such a width requires.”

The aim is to confine wheelings to just 13% of the field surface compared with the 140% typical from conventional operations. The consequent reduction in compaction will deliver substantial benefits on the mainly heavy boulder clay soils under PX Farms’ care.

“During my recent Nuffield Farming Scholarship, I talked to growers from Australia, the USA and Argentina. The findings suggest that the more friable, well-structured soils could produce yield increases approaching 18% within a few years of adopting CTF.”

In addition, fuel savings of up to 30% are possible, he adds.

During the past two seasons Mr Peck has invested heavily in machinery to suit his 12m system. Key equipment includes a Bateman RB55 36m sprayer, a pair of Claas Lexion 600TTs with 12m headers and, at the heart of the system his most recent purchase, a 12m Horsch Sprinter 12 SW drill, one of just three in the country.

In addition, a Horsch Titan 34 chaser bin, which plays a vital role in reducing wheelings during harvest, has just completed its first season.

GPS network provider RTK Farming provides the steering system and telematics to link the machinery up. “The system is so accurate and reliable we can drill without markers, including the headlands,” says Mr Peck.

Some tweaking has been needed to get round the fact that not all machines operate at the claimed working width. The combines’ cutterbars are slightly narrower than 12m. That, and the 4cm safety margins needed at each side of the header when operating to allow for GPS error, means the distance between tramline centres has to be set at 11.9m.

“During my recent Nuffield Farming Scholarship, I talked to growers from Australia, the USA and Argentina. The findings suggest that the more friable, well-structured soils could produce yield increases approaching 18% within a few years of adopting CTF.”
James Peck, managing director PX Farms

The practical implications are, fortunately, limited. The Sprinter drill operates at a true 12m, but its 30cm tine spacings mean the slightly narrower rows where drill bouts join is scarcely noticeable.

The sprayer’s working width should ideally be reduced to 35.7m, but Mr Peck believes the slight overlap is no more than would be expected when spraying using tramlines established by drill markers.

The 6m Vaderstad Topdown also came up short, with a working width of 5.75m. “We changed it for a 7m version and took the outside tines off, so it is now running at 5.95m.” A made-to-measure Horsch cultivator is now on the cards.

To minimise machinery footprint the spacing between the inside edges of tyres or tracks for all PX Farms’ machines has been set at 1.8m. Apart from a John Deere 7530, which had to have spacers fitted, all the kit could be set at this tracking without special modifications.

“Machinery comes with many different tyre and track sizes,” says Mr Peck. “We struggled to find a centre to centre width that would suit both road restrictions and our machinery, but this inside track width works well.”

The steering ram on the Sprinter drill’s seed cart has been modified to ensure it follows precisely in the tracks of the Challenger 865 up front when turning at headlands. “Managing headlands is perhaps the biggest challenge with CTF,” says Mr Peck. “They can account for 25% of a field. Turning needs to be mapped and machinery designed so it turns on the same radius.”

The new drill, introduced to the UK this summer, has matched Mr Peck’s high expectations. Its Duett coulters loosen and mix soil while removing stones, clods and trash from the seed zone. Seed is sown in two broad bands, across 70% of the soil area, reducing competition within the row and promoting better weed suppression.

The tungsten-tipped coulters loosen the area below the seeds, creating a 5cm deep furrow. This is designed for accurate fertiliser placement, but also helps water drain away.

So far the drill has completed 1,300ha of oilseed rape drilling, 80% of it direct drilled, and at the time of writing was making rapid inroads into 1,400ha earmarked for wheat, some of which has also been direct drilled.

With most key machinery now adapted to the system, this autumn has marked a major step forward in PX Farms’ CTF programme, says Mr Peck. “The greatest asset any farmer has is his soil. We’ve still a way to go, but I firmly believe that CTF will be a real step forward in helping us protect and enhance this fundamental asset.”