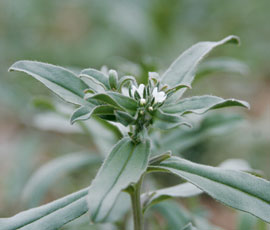 It used to be a common weed in arable fields, but soon corn gromwell might be a nice little earner for growers looking for an alternative spring crop.

The reason: healthy oils. Corn gromwell oil contains stearidonic acid (SDA), which can be converted in the body to form omega-3 fatty acids that are known to help fight cardiovascular disease.

Oily fish is the usual dietary source of omega-3 fatty acids, but current consumption in the UK is less than the recommended intake, and a land-based source is thought to be more sustainable than increasing the amount of fish in the diet.

It was against this background Technology Crops began looking for a plant with a better oil profile than echium, which is currently the only commercial non-genetically modified crop source of SDA, says Neal Boughton, the firm’s director of agronomy.

A literature search found corn gromwell could fit the bill, producing an oil containing up to 20% SDA, a similar amount to the genetically modified soya bean crop developed by Monsanto, and 5% more than echium.

That made it more attractive to processors, Croda, who, having obtained approval for echium oil to be used in food two years ago, are looking for a similar approval for corn gromwell.

But the former weed has also some properties that make it much more farmer friendly than echium for commercial growers. Chief among these is that it naturally senesces, which means it can be direct combined using the farm combine, says Mr Boughton. Echium is usually swathed before being harvested.

“It is different from echium and borage also, in that it holds on to its seed and will stand in all weather until it is combined.”

A full agronomy package for the crop has been developed during a three-year DEFRA-funded LINK project also involving NIAB TAG, increasing the numbers of research trials, says Mr Boughton.

It is best drilled as an early spring crop from February onwards at a depth of around one inch into a good seed-bed. Medium to light soils seem to suit it best, with heavier soils less favourable, partly as they can be harder to prepare.

Seed rates need to be adapted for germination and thousand grain weight, but Technology Crops will simplify it for growers by selling seed in hectare bags rather than by weight.

It branches out well from both the base and further up the main stem to fill gaps, but it is important to have as high population to increase weed competition.

Two specific off-label approvals (SOLAs) have been approved for the crop – pre-emergence Butisan (metazachlor) for broad-leaved weeds and Falcon (propaquizafop) for emerged grassweeds.

Other SOLAs have been applied for, while screening continues to increase the range of products able to be used, adds Mr Boughton.

Around 50kg/ha of nitrogen is required – usually applied either pre-planting or just after emergence.

Trials yields have topped out at 1.33t/ha, with commercial yields of around 0.75t/ha when grown in 1ha blocks.

As yet no prices have been set for the oil, but Mr Boughton recognises it will have to stack up against other commercial crops. “It will be a high value crop, but it is much lower risk than echium and borage, with which if the weather goes against you or you get your timing wrong you can lose a lot on. This, we are hoping, will be as reliable as linseed.”

With the market not yet fully developed and no food use approval in place, the current season is just the start of a two-year seed multiplication phase prior to a commercial launch in spring 2013.

“It will only be available on contract, so the area depends on how the market develops. Realistically the maximum market is in tens of thousand of hectares, and unlikely to be as big as the 150,000ha of linseed grown.”

Among the 27 different sources of corn gromwell collected from various parts of the world for the research project were ones from eastern Europe that turned out to be winter types, says Steven Bentley, NIAB TAG’s pre-breeding programme leader.

The discovery has led to the possibility of developing corn gromwell into a winter crop option, as well as a spring crop. “Potentially that would mean higher yields, and provide greater flexibility for growers.”

Winter lines are now being tested, along with testing in different regions to check the oil profile remains stable in different conditions.