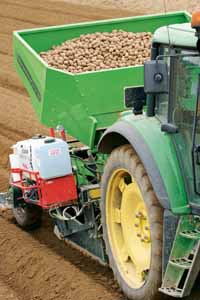 “Nematode numbers have increased dramatically in the last 10 years,” he reveals. “Up until recently, the focus has been on their role in tobacco rattle virus (TRV) transmission and the development of spraing.

“But an increasing concern is their contribution to crop quality problems, in both the pre-pack and the processing sectors.”

There are several different species of free living nematode, all of which favour the lighter soils and will feed on roots of many plant species, he continues. “Only one carries spraing. The others cause direct feeding damage, affecting the appearance of the crop and increasing sugar levels in tubers.

A rise in sugar levels has a detrimental effect on fry colour, making it darker and often unsuitable for processors, he adds.

Existing treatment thresholds are out of date and need revising, notes Dr Evans. “They were established 30 years ago. We’re growing different varieties now and responding to stricter protocols. A more scientific basis is required and the new project will address this.”

A further consideration is that some varieties can cope better than others, he continues. “They don’t show virus symptoms, so control advice has to be fine-tuned accordingly.”

Soil tests can give nematode counts, species identification and an indication of risk, he says. “Virus status can also be confirmed by soil sampling. If TRV is present, you can opt for growing a tolerant variety or using a nematicide. If not, but high numbers suggest feeding damage will be a problem, then a nematicide is the best course of action.”

Soil conditions from planting up until tuber initiation have a bearing on feeding damage, he stresses. “If it’s cold and wet, it favours the nematodes as crops take longer to emerge. If it’s warm, the crops tend to get away quicker and there’s less time for the nematodes to feed.”

Eric Anderson of Scottish Agronomy has been looking at the effect of nematicides on yields and fry colour in trials for the last two years. He has found significant yield increases where nematicides are used, as well as a lighter crisp colour.

“We compared untreated with the use of Nemathorin, Vydate and Mocap, as well as a combined Nemathorin treatment followed by an in-furrow application of three litres of Amistar.”

All the treatments were beneficial, with the combined Nemathorin/Amistar programme being the best. “That’s probably because there’s an interaction between the nematode feeding damage and infection by rhizoctonia, so the Amistar component is controlling the soil-borne phase of rhizoctonia.”

His advice is for growers to look at direct feeding damage thresholds, which vary according to the species. For trichodorus species, he suggests a threshold of more than 75 for each 250g soil; for longidorus, it’s above 25 for 250g soil; and for pratylenchus it should be approaching 100 for 250g soil.

“There is a lack of consensus on population levels and their impact on yield,” he acknowledges. “The thresholds should be used along with information on variety, moisture content and soil type.”

Mr Anderson also reminds growers to look at the withdrawal period when choosing a nematicide. “Nemathorin has a 17-week harvest interval, while Vydate needs a residue test to be conducted before burn down. So it won’t be appropriate for salads or second earlies.”

The other relevant issue for this coming season is that a change in ownership and distribution arrangements means that there will be a shortage of Mocap. “There’s going to be only 50% of the normal volume available. So discuss your requirements as soon as possible, to ensure you get what you need.”

Branston’s senior field manager for Scotland, Jim Aitken, believes that growers could be missing a trick if they only treat crops which are at risk of spraing.

He points out that high nematode numbers are causing considerable damage to the surface and appearance of tubers, but all too often these symptoms are being attributed to other things.

“In severe cases they’re ruining the appearance of the crop, rather than the yield,” says Mr Aitken. “But the marketable yield can be reduced significantly. Retailers are very particular about the tubers that appear on their shelves.”

He has seen effects on uniformity, establishment and skin finish where high nematode numbers are present. “They’re a particular issue in soils with a high sand content.”

Mr Aitken advises growers to consider the use of nematicides. “They’re not just for spraing. An in-furrow treatment won’t cost as much as an overall application, but remember that it’s not an option with some products.”